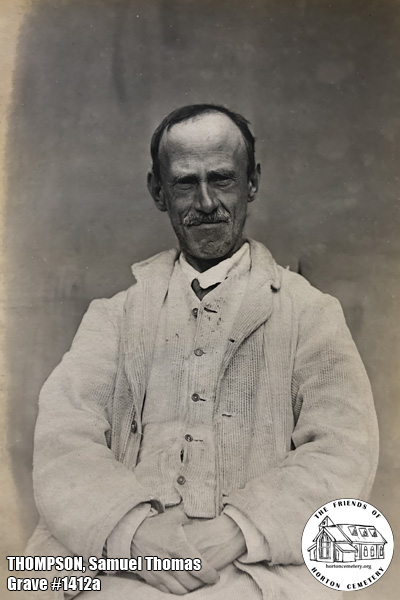 Thanks to his distinctive name it is not difficult to find Samuel Thomas Thompson in censuses and other official documents. Even so, we can only glean a few details of what appears to have been a rather uneventful life. What we know is that his early years were marked by tragedy. He became a clerk and he lived with his parents until he was at least 34. The last sixteen years of his life – and probably even longer – were spent in mental health institutions.

Dinah was born on the 19th of July 1828 in Prees, Shropshire, though her parents were living at the time in Welsh End, a rural hamlet in the parish of Whixall in Shropshire, about three miles from Prees. The hamlet is adjacent to the border with the Welsh county of Clwyd. Dinah’s parents, farm labourer Thomas Powell and his wife Sarah (née Key) were Primitive Methodists and they worshipped in the Welsh End Methodist chapel.

The British and Foreign School Society

We do not know where or when Samuel and Dinah met but it would appear that Dinah was still living in Shropshire at the time of the 1851 Census. In the same census we find Samuel senior living with his parents at 5, Richards Terrace, Albion Street in Rotherhithe. He is now 21 years old and is described as a ‘student in British and Foreign School Society’.

The British and Foreign School Society (or BFSS) was founded in the late 18th century by a visionary who wanted to maximise educational opportunity for all. Recognising that the cost of education lay mainly in the salaries of teachers, Joseph Lancaster devised an innovative method of teaching which made it affordable for poorer families by having the schoolmaster delegate basic teaching of younger children to older pupils called monitors. One schoolmaster was responsible for 300 or more boys, all accommodated in one large classroom.

In 1798, Lancaster opened his first school in the Borough Road in London, followed by a teacher training establishment. Lancaster had a flair for recruiting support, often from wealthy non-conformist families although several members of the royal family also contributed. In 1808 the Society for promoting the Royal British or Lancasterian System for the Education of the Poor was formed to help Lancaster organise and control his financial affairs, which were by then in disarray.

In 1814 the society changed its name to the British and Foreign School Society. Today the society uses its capital to provide funding for educational projects around the world.

Two deaths in the family?

It is possible a second tragedy befell the family just two years later: a Louisa Alice Thompson was born in Bermondsey in the 3rd quarter of 1862, to a woman whose maiden name was Powell, but died in Rotherhithe in the 2nd quarter of 1863 before reaching her first birthday. If this was, indeed, our subject’s sister one can only imagine the devastating effect the loss of two young children in such a short space of time would have had upon the family.

In the 1871 Census Samuel, Dinah and their two sons are living at 2, Albion Street in Rotherhithe and Samuel senior is still a school master. However, by the time of the 1881 Census the family had moved to 76, Albion Street and Samuel is working as a commercial clerk. Samuel Thomas, now aged 23, is a solicitor’s clerk and Philip is a ‘grocer’s shopman’. On Christmas Day 1888 Philip left the family home to marry Lizzetta Alexandra Castell in the Church of St Mary Magdalene in Bermondsey. At the time of their marriage Philip was working as a packing case maker and the couple were living at 18, Frean Street in Bermondsey.

Nothing has changed by the time of the 1891 Census: 33 year-old Samuel is still a solicitor’s clerk and he and his parents are still living at 76, Albion Street. However, the following year Dinah died aged 62. She was buried in Southwark on the 21st of January 1892.

We do not know if Samuel had always suffered from mental health problems and they worsened as he got older or if he experienced a sudden onset of psychotic symptoms triggered, perhaps, by the death of his mother, but in the 1901 Census he is a patient in the London County Lunatic Asylum in Coulsdon. Unfortunately it has not been possible to find his date of admission in the institution’s registers.

In the same census, which was taken on the 31st of March 1901, Samuel senior is living with his son Philip and daughter-in-law Lizzetta at 55 Trundleys Road in Deptford. Sadly, just six months later on the 25th of August, Samuel senior died aged 72. His estate, valued at just £5, was left to his son Philip.

Admission to Long Grove and death

We do not know when Samuel was transferred from Coulsdon to Long Grove but he sadly died there on the 15th of January 1917 aged 59. Two days later he was buried in Horton Cemetery in plot 1412a.