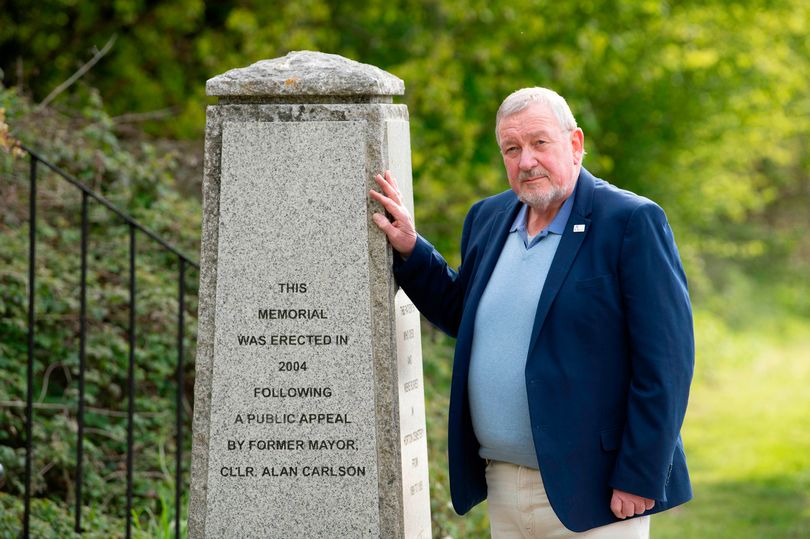 A former Epsom councillor has spoken of his disgust with the continuing neglect of Horton Hospital Cemetery.

Alan Carlson, who for years was one of the town’s councillors campaigned whilst Mayor of Epsom and Ewell in 2001 and continued when his mayoral responsibilities ended.

The generosity of the public concerned at the neglect of the privately owned Hook Road graveyard enabled Mr. Carlson to arrange for an engraved granite memorial to be placed just outside the iron-railed cemetery. Since its erection and its dedication in 2002 the monument has attracted a ‘steady stream of floral tributes’.

Mr. Carlson said: “It, is hardly ever without flowers or wreaths, surely a testament to how much this cemetery means to local people? However the conditions within the grounds remain a shocking insult to those laid to rest within and are an indictment of a system that allows such public land to get into the hands of property speculators who wish to create land banks against the prospect of future development opportunities, with no regard to the sensitivity of the site.”

Up to as many as 9,000 patients, soldiers and children lie buried within site, but since the 1980s when the Authorities sold it off, it has been owned by Marque Securities a development company based in Kingswood Hall, Surrey.

Director Michael Heighes bought the land for commercial purposes and future investment. His bids to develop the site have so far been met with refusal from Epsom and Ewell Council.

For his part Mr Heighes is still hoping to get permission one day to concrete over the graves and use the site for leisure development “suitable to that area”. At one time he asked if he would need special permission to turn the land into a pet cemetery.

Mr. Heighes offered the council “a useful chunk” of the cemetery ground where they could have put the memorial, but in return wanted the go-ahead for developing the rest of the site, which the council refused. The memorial was therefore placed outside the boundary of the cemetery.

At the remembrance service on November 10, wreaths and flowers were laid. A two-minute silence was observed and then 12 white doves were released to fly over the cemetery. This brought a sense of awe and wonder to the event, but the state of this derelict, untended former cemetery remains an insult to all of us who care. “Some of us have not forgotten,” added Mr. Carlson.

When asked if he would be tidying up the cemetery or selling it on to someone who would, Michael Heights declined to comment.