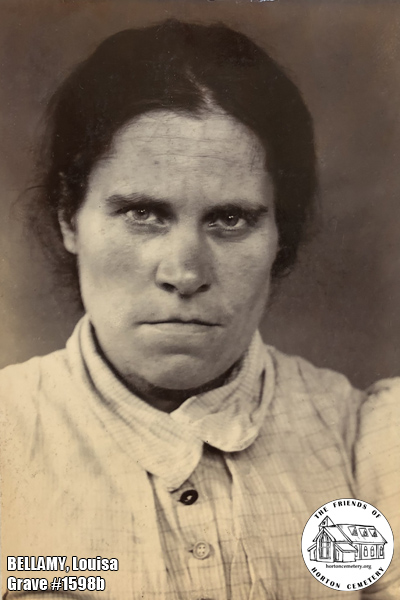 Louisa Bellamy was born Q1-1867 along with her twin brother John, to Edward Bellamy and Frances Bellamy neé Hathway. Their father, Edward, was 34 and their mother, Frances, was 30.

Edward and Frances married on 17th June 1860 and their residence at the time was in Brother’s Row. The witnesses were Edward’s brother James and Frances’ sister Mary. According to the census of 1861, Edward and Frances had moved and were living together at St. Margaret’s Court (formerly Fishmongers’ Alley until 1835).

Tragically, in Q1-1872 Louisa’s twin brother John died aged 4. The loss of a twin must have been terribly hard to bear at any age.

In 1881, Edward and Frances are living with only Ellen ‘Eleanor’ (19) and Edward (10) along with nephew William (14). We find Louisa living with her grandparents on her mother’s side. Robert Hathway (68) a Wood turner and his wife Frances (70). Was this due to her behaviour which we learn later was quite troublesome and violent?

Louisa’s father Edward passed away in September 1890 in London, at the age of 57.

Louisa’s mother Frances and youngest brother Edward are living at New Church Road. Her 20 year old brother’s occupation is described as a photographer.

Louisa, whose profession is as a servant, is found working for the Minister William Rowe and his wife Thirza at 29 The Avenue, Richmond. Although the place of birth is stated as Bayswater and the age is slightly out, these details were often given by the head of the house who either may not have known his servant’s age or may wish to elevate his servant’s background. Although this cannot be 100% assured as correct it is a very likely that this is our Louisa.

On 6th April 1895, Louisa was admitted to the Constance Road workhouse in Camberwell by Police order, ‘alleged Insane’. After being at the workhouse for 2 weeks she was discharged to Fisherton House asylum. Little did she know that she would never return to normal life outside of an asylum again.

We do not have the records for Louisa’s stay at Fisherton House, but on the 07 June 1899 she was transferred to Horton asylum and we can build a picture of her from her case notes. It would be interesting to read the observations taken at Fisherton, and whether there was any mention of anything that may have triggered her anger and depression.

Louisa was admitted to Horton ‘Not Improved’, meaning that she was a troublesome and potentially dangerous patient. The case notes confirm her mother Frances and the family address of New Church Road, in SE London. She is noted as being a danger to others “by striking those about her”, and suicidal.

Violence of language & behaviour. She is vindictive, quarrelsome, abusive, sullen, taciturn and morose. She shows want of self control. Her demeanour is fierce, threatening, passionate & eccentric.

Facts communicated by others viz. :-

She frequently threatened to commit suicide & told me she had several times attempted to drown herself. She has delusions that everyone was persecuting her & trying to make away with her.

She is sullen and resistive, it is with difficulty that she answers questions or that one can examine her. She thinks life is not worth living because she admits she has been very wicked. She is anxious to die, denies any wish to commit suicide.

Is demented, dull, takes no interest in her surroundings, says that she thinks that it is the month of May, says she is 20, does not know what year it is.

The case notes for Louisa are extensive, spreading beyond the standard 2 pages.

We learn that when admitted, although physically healthy, she clearly suffered from a deep, deep depression. Could this have been a result of losing her twin brother at such a young age? Louisa appeared to have given up on life already, constantly being described as demented, dull and ‘vacant minded’. Throughout her stay she is described as a hard worker (scrubbing) but was very noisy, and abusive when ‘in the centre’.

Outside of the asylum, Louisa’s mother Frances Mary passed away on 1 July 1909 at the age of 72. There is no mention of this in the case book.

In the year 1910 Louisa began complaining infrequently of pains in stomach, and then her legs. Then on Oct 22 1910 it is noted she has a large carcinoma of right breast which has “obviously been there for several months”. For the first time the terms ‘Poor health’ is used.

Louisa’s health deteriorated very quickly, being bed ridden and described as very feeble from December 1910. This continues for years, she never left her bed and became more and more incoherent throughout. Louisa’s health issues were gradually increasing, she was unable to do anything for herself and was clearly suffering.

She is reported to be receiving local cancer treatment in 1914, but by 1915 the mass is described as very offensive.

Louisa BELLAMY died at 10:35AM on 2 February 1915. She had been suffering for some years and her cause of death was carcinoma of the breast (breast cancer). She was 47 years old. She is buried in Horton cemetery grave ref #1598b.