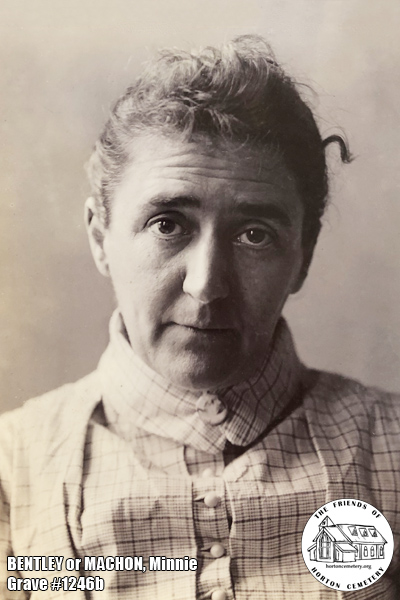 The young bookkeeper and the Silk Merchant

One thing to resolve is why we have two surnames? Throughout the asylum hospital records they always referred to Minnie’s surname as “Bentley or Machon” so we have kept that name for our title. What will the research uncover?

As a researcher I was fooled with this person several times, building and scrapping lots of research, sometimes coming up with the same results which never quite fit the facts. It was quite difficult to piece together anything unquestionably firm before Minnie’s asylum years.

What we know about her family

From the asylum visitor book, we have a clue that Minnie had a sister called Martha Kelly living at Eastbourne, another sister Alice in Pimlico and a brother William Machon in Plattsburgh, New York. Interestingly there is a friend listed with the surname Bentley, which was the very clue required to crack open this sad story.

Due to her brother using the Machon name, I will assume that this is Minnie’s maiden name and Bentley was added later, even though all records indicate she was single.

William Machon first appears in New York records when he records his marriage to Rose Delia Amo nee. Suparneigh on 29 Aug 1900, they married on 18 May 1900. The marriage record gives us some useful information as to Minnie’s parents.

This branch of the Bentley family forms an interesting history or early American hoteliers, but this story is about Minnie.

A search of the 1911 census records turns up an Edwin BENTLEY located at 39 Wilson Road, Camberwell, which matches the visitor book. The census states he is 66 years of age, a widower, and a silk merchant. There are various London electoral register records from at least 1906 through to 1914 showing Edwin living at this address. Working back from this fact we discover more.

Listed as a friend in the visitor book, the research into Edwin uncovers a very interesting story in itself. In summary, born in 1847, became a silk merchant, married, and had two sons. His wife left sometime between 1881-91 and pursued a life with a much wealthier man; whether this was due to Edwin’s doing or her own pursuit of happiness we will never know. Minnie’s asylum records indicate a possible affair between Edwin and herself.

In 1891, Edwin (43) is found boarding with his ‘apparent’ wife, Minnie (29), at 20 Harper Street in Holborn. Edwin is a still a merchant and Minnie is a bookkeeper. Their statement of marriage may have been so that they could live together in the boarding house, as no marriage record can be found.

We cannot be sure what happened between 1891 and 1896 when the next chapter of Minnie’s life is found. Again, her asylum record of ‘Mental State’ below gives us a picture of how she came to be found.

The asylum admission records show that Minnie was previously at the Fisherton asylum where she was to spend 3 years of her life. We have been advised by an advisor of Swindon history centre, that the Fisherton asylum records do not hold much useful information other than Minnie is described as a pauper from Camberwell, found wandering by the police. I have managed to link this to a workhouse entry and discharge record.

From Fisherton, Minnie was released into the care of Horton asylum. Minnie was admitted to Horton from Fisherton ‘Not Improved’, meaning that she was likely a troublesome patient.

Minnie BENTLEY or MACHON was patient #6, admitted June 7th, 1899. She entered the Horton asylum on the same day as Louisa BELLAMY, another one of our stories.

From the Manor/Horton hospital records we can discover a little more about her life.

The reception notes confirm that her sister was Martha Kelly, living at 25 Cavendish Road, Eastbourne. Minnie is noted as not being a danger to others and that her first ‘attack’ had happened at age 33, some 3 years prior to 1899 (1wk prior in 1896), which lines up with her admittance to Fisherton Asylum.

Facts indicating insanity observed at the time of examination viz: –

She is in a nervous & excited state, depressed & melancholic, asking if we are going to kill her & is full of delusions, as to her life having been attempted by her neighbours & has to her having been electrified.

Minnie was in very good health with no obvious negative points on physical health noted.

Ran out of her house without proper clothing on into the street because she thought there was lightning in her room. She was terrified at the infirmary because she heard screeching as though many people were being burnt to death at the stake. She has aural hallucinations of voices which say that “she is about to die”. She has mistaken ideas of identity and thinks two doctors she saw at Fisherton Ho. where the sons of the man she was living with.

She is very nervous and hysterical and easily excited and says that she does not want to [come] between the man she lives with and his lawful wife who she says is very rich.

Minnie’s case notes from this hospital span 3 columns over 2 pages. Dated from Sept 20, 1899, to 12 July 1907, each entry appears approx. 3 months apart. The photo shown (click the three dots top right if on mobile version of this site) is of Minnie aged 33.

The visitor book shows that Mr Bentley visited Minnie frequently, much more so than her family, listing visits from her admittance to Manor in 1899 right through to 1907, when she was discharged to Long Grove. He may have continued to visit, but there are no Long Grove records existing to prove this. Clearly he still cared for Minnie.

Minnie’s records mention Mr Bentley, on Nov 6th, 1901, “Talks about her relations with Mr Bentley and what Ma told her. Does not know if she is married or not. Talks at an enormous rate and is very anxious to let you know the complete history of the affair. Refuses to stop and repeats herself.”. If Minnie believed herself to be married to Mr Bentley, this explains the confusion.

The recurring issue with Minnie is delusions and the fact she suffers from voices in her head, although her physical health is fine. These delusions are repeated throughout. From around Aug 1902, she begins accusing people of using her for immoral purposes. By 1904 she is mentioned as working in the needle room but continues to say she is insulted and tortured at night. There is little change in 1905, and by 1906 her notes are simply reduced to single sentences such as “works in needle room”, “says she is tortured by electric shocks”. By April 1907 her delusions persist, and she believes her insides are cut up. This is the final examination before she is transferred out of Manor to Long Grove asylum.

The last entry dated 12 July 1907, reads Removed to Long Grove Asylum ‘Not Improved’. Unfortunately, the Long Grove records no longer exist so this is where our research ends.

Minnie BENTLEY or MACHON died at Long Grove asylum on 8th November 1934 after a stay of 27 years and was buried 5 days later on 13th November in grave #1246b.

What of Mr Bentley?

By 1891, Emma is head of a manor house with her sons, and ‘visitor’ Joseph Stower (Auctioneer). Joseph was a very successful man, and it would appear that Emma went on to have a life with him, although he was still listed as a visitor in 1901. Emma died very wealthy later receiving the auctioneer’s probate.