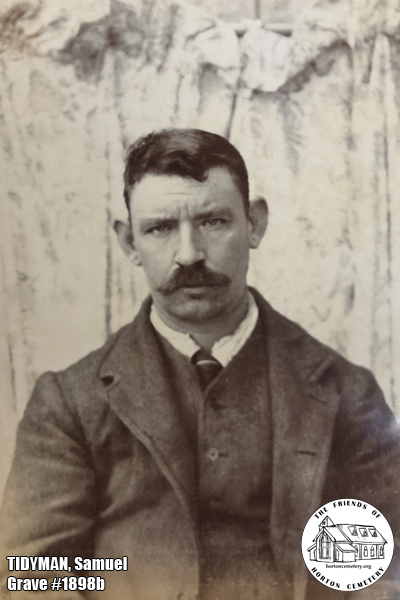 The surname Tidyman /Tydeman appear synonymous throughout this story.

Samuel’s birth was registered in the 1st Q Croydon District in 1867, but most likely he was actually born in 1866 although we have no baptism to be certain of the exact date. He was born in Merton, Surrey one of only two children born to Samuel and Sarah Tidyman née Cook. Samuel senior was born in 1836 in Essex and Sarah in 1839 in Suffolk.

In the 1861 census Samuel is seen as a lodger in the Cook household in Somersham, Suffolk, they married in Ipswich in 3rd Q 1862. No births can be identified prior to Samuel junior’s arrival in 1866 in Merton, Surrey.

In 1869 drama overtakes the family when Samuel and a man called James Winter appear at the Old Bailey on 25 Oct 1869 accused of, “feloniously administering to a Samuel Tidyman a certain poison with intent to kill him” but no evidence was given and they were found not guilty.

MR. RIBTON, for the Prosecution, offered no evidence. NOT GUILTY.

Could this have been a case of young Samuel suffering an Epileptic fit which went unrecognised by the Doctor?

Sarah and Samuel appear to have been reconciled as in the 1871 census the family is living at 11, Inkerman Terrace, Enfield, Samuel Snr is said to be the ’Foreman in a coal business’.
Samuel and Sarah’s second child, Caroline, is born in 1871, according to the 1939 register her date of birth is 15 August.

Sadly, in April 1876 Samuel snr died and is buried in the Parish of St James, Enfield, he was just 40 years old.

At the time of the 1881 census Samuel had entered ‘Fisherton House Asylum’ on 27 July 1887, in Salisbury, Wiltshire. He is discharged from there on 28 June 1892 and admitted to Cane Hill Asylum in Coulsdon, Surrey where he stayed until 19 Feb 1900.

He is then sent to Horton Asylum, Epsom. One likely reference to him is found in the 1901 census for ‘The Manor, Horton’. Reading ‘ST’, b.Merton.

He appears to have been discharged on 03 Mar 1902 but immediately readmitted to Horton where he remained until 24 Oct 1903. Each time Samuel was discharged he is shown a ‘relieved’ or ‘not improved’. The 1903 records are not available online and so we cannot tell where he went.

On 24th Oct 1903 Samuel was transferred from Horton Asylum to the Epileptic colony, Epsom. On his documentation his mother is named as Sarah Chamberlain living at 3 Back Row, Totterton, Lower Tooting, it says that he is suffering from ‘hereditary Epilepsy’ and that he is suicidal and dangerous.

His sister Caroline reports that his fits only occur once a year and that at that time he can become delusional and violent and has threatened to kill people including herself. On entering The Colony the contributing factors of his illness are given as ‘protracted hard labour’. ‘Insane, hereditary (brother)’ although I have found no trace of a brother at this time. ‘Congenital muitas defect’ which is a heart defect.

Samuel appears to have settled well in the Colony and worked variously on the farm and as a coal porter and latterly in the stores. He suffered very few fits and was generally considered slow minded but hard working and peaceable until around 1904 when his character and general behaviour began to change.

In the 1911 census Samuel is in the Epileptic Colony, Epsom, Surrey. He is 45yrs old and it says that he was formally a ‘Mariner’; it also says he was a “lunatic from birth”. According to records found in the Surrey Archive he was in the Marines for 9 months before being invalided out aged 18yrs due to ‘fits’. It also tells us that he left the ‘orphan school’ at 16yrs and worked for some time as a chimney sweep.

In March 1912 he was transferred from Beech Villa to the hospital and over the next few months he gradually deteriorated and became ‘more comatose’ until, on 5th March they ‘trephined’ him but to no avail.

Samuel died on 11 Nov 1912 at 11.17am and is buried in the Horton Cemetery, grave 1891 b. A post-mortem was undertaken and the cause of death was given as ‘Cerebral Tumour and Myocardial degeneration’.

The Epsom Cluster comprised five asylums built between 1899 and 1924. ‘The Colony’ where we find Samuel in 1911, opened in 1903 to cater for the “Epileptic insane of the Metropolis” and offered some new treatments recently available. Patients contributed to the whole of the cluster by working in some capacity in the laundry or the bakery or kitchen or outside in the garden or on the farm.

Despite much searching we can find no further records for Samuel’s mother Sarah. On Samuel admittance papers in 1903 she is calling herself Sarah Chamberlain but no Tidyman/Chamberlain marriage can be found at this time so possibly there was another unknown husband in between. Possible census and death registration for Sarah Cook are shown on FT.

There is a possible reference to Samuel’s sister Caroline in the register of the ‘St George in the East Industrial School’ East Ham, using the name Cook, otherwise she cannot be found in the 1881 census. Caroline marries in the 3rdQ of 1888 in the Croydon Registration District to Joseph Cowley, b.1860. They had five children, Ellen Caroline b.1889, Mary Elizabeth b.1890, Susannah Alice b.1897, John Joseph b.1899 and Thomas George b.1904.

We have no confirmed death for Joseph Cowley between 1904-1910 but on the 1911 census Caroline is shown to have re-married (less than 1 year,) to Alfred William Fuller, and is living in with all her children (Cowley) at the same address she shared with Joseph. She died in 1954 in the Wandsworth Reg Dist.