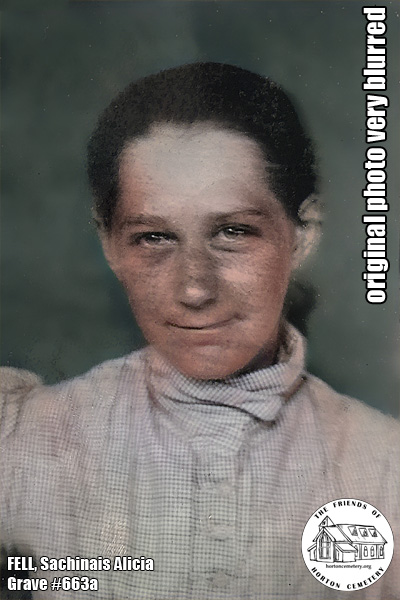 When I began my research into Sachinais, very little could be found. The only records showing such a name are the records from the workhouse and asylums. Therefore, I believed this could be a false or ‘preferred’ name. Without speculating, it was impossible to link Sachinais to any family whatsoever.

In fact, there are no records for anyone named Sachinais across online worldwide records available ‘at this time’. The name ‘Sachinais’ does not even appear in any newspapers. She may have forever remained a mystery. One thing we can be sure of though, is that she was someone’s daughter.

When this investigation began, the only records which can be confirmed are Death Record, Poor Law Discharge, Lunacy Admission/Discharge and Grave. Over time I have been determined to bring Sachinais back from the forgotten and have returned to this story four times.

*UPDATE Nov 2022* Manor records found with a blurry photo that we have tried to enhance (original suffers camera shake).

On 28 March 1900, a 27-year-old Sachinais was admitted to Manor Asylum, case number 589. She is noted as a single Governess, today’s closest equivalent would be an au-pair. It is noted that this is her first ‘attack’ and had been ongoing for a month. Therefore, I believe that this admission to Manor is her first experience of the Asylum system. She had come from Lambeth Infirmary (not the workhouse next door).

The notes state that her father died in an Asylum, and her mother was simply Mrs. Fell of 17 Ferndale Road in Brixton. Ferndale Road was an affluent area, an exciting, bustling street at the turn of the century with trams running through to Kennington. Sachinais would likely have visited Brixton’s Bon Marché which can claim to be the first purpose-built department store in the UK, and also the first steel frame building in the country.

Facts indicating insanity observed by myself at time of examination:

She is very strange in manner and conduct. Complains that she isn’t the victim of a plot. She states that even strangers in the street tell her to fly, she says her house is full of burglars because she hears the skeleton keys. She refuses food saying that we unconsciously are helping the plotters to poison her.

Facts communicated by others:

Consequence of a telegram sent to Scotland Yard he visited the patient; she was very strange and stated that burglars were in the house. Thought her death warrant was out & wished to see the Queen.

The medical examination gives the impression of a very healthy, and very clean girl with distinct speech.

Following the examination, the summary of her mental state is,

Full of delusions of suspicion & persecution, shouts that Mr Hammond was not buried and that there is a great plot against her. Excited at times, ?????, appears to have aural hallucinations; she is so young to die.

The case notes spread across a brief stay, from April 4, 1900, to Aug 28, 1901. Beginning with a girl who is sure that people are trying to murder her. She soon becomes increasingly violent towards nurses and others, being moved to ward C, then H. The staff noted that she is troublesome and constantly trying to escape. Throughout she maintains that she is the subject of a plot to poison and incarcerate her; but on a more positive tone, the notes say that she is always in good health, very intelligent and ‘writes a very good letter’. On August 28, 1901, she was relieved from Manor hospital asylum, which matches the admission date to Cane Hill Asylum. The records for Cane Hill asylum are held at the Museum of Croydon and not available online. Cane Hill Hospital, Coulsdon | The National Archives.

*UPDATE* with thanks to the Archivists at Croydon Museum, we now have the admission record for Alicia at Cane Hill. It does not give much information, but it is another piece of the puzzle.

On 21st November 1905, a 32yr old ‘not improved’ Sachinais was transferred from Cane Hill to Rubery Asylum, or Birmingham City Asylum along with three other ‘lunatics’.

Sachinais was admitted to Long Grove Asylum on 27 Apr 1908 and the records indicate she became a Pauper from 7 July 1908.