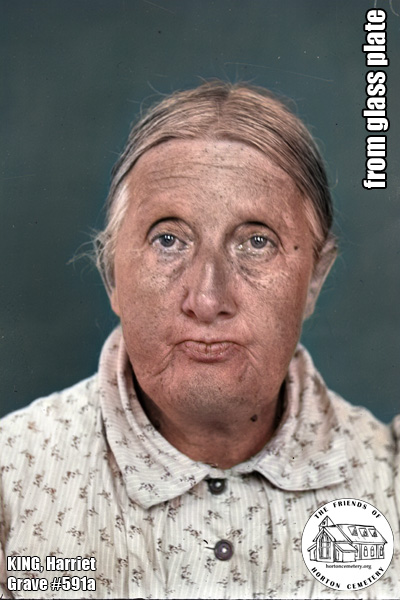 I took on this story and at first thought it might be a nice easy one to complete, but how wrong I was. This took some extensive research to ensure I was following the right person. I dug my through a quagmire of incorrect research done by others online, and eventually unravelled the story of Harriet, and documented my research here. Without the Manor asylum visitors log, Harriet’s family may never of been brought back to us completely. If you want to see how this story was researched, view here;

Harriet KING, was born Harriet Jemima Boram on 22 January 1836 in Bethnal Green, Middlesex, her father, Isaac Samuel Boram, a saddle/harness maker from Essex, was 32, and her mother, Margaret Ann Smith, was also 32.

Isaac and most of the family remained living in the area of Whitechapel/Limehouse, East London for most of their lives.

Harriet’s parents, Isaac and Margaret had a total of 8 children over a 22 year period.

The 1841 Census shows Isaac and Margaret with 5 of their children; Isaac, Edwin, Emma, Harriet and Amelia. They are living in Colchester Street (The 1841 census didn’t specify the house number). Only half of this street still exists today, the remaining part now known as Manningtree Street, just off of the south side of the main Whitechapel High Street near Aldgate East station.

Life in 1841 was quite eventful for the Boram family. In April, at the time the census was taken, 17yr old daughter Margaret was 8 months pregnant and possibly hidden or sent away to avoid embarrassment. She gave birth at 5 Colchester Street to daughter Patty on 11th May. When registering Patty’s birth, Margaret registered her as ‘Patty Dalton’, father ‘John Dalton’, but the registrar quickly deleted these facts upon learning they were not a married couple and John was not in attendance. Patty was brought up as a sister to her mother Margaret and the siblings, and went through life listing grandparents Isaac and Margaret as her parents on both her later marriage certificate and her later-in-life baptism when she was 49yrs old.

Aged 18, our Harriet married Henry KING in 1854, both living at Commercial Street, Whitechapel.

Their first child, Harriett Emeline KING was born a year later in 1855. By the time of the 1861 census they were living at 28 North Street, Whitechapel, with children Harriet E. (6), William Henry (4), and George (2).

Throughout the 60s and 70s the family grew, suffering the loss of William Henry aged 5 in 1862, and a daughter Caroline, who died aged 0 possibly stillborn in 1863. These tragedies were then followed with the death of Harriet’s elder brother Edwin in 1864. It wasn’t all bad news though, by 1863 all of Harriet’s siblings had married, and Harriet was witness to sister Patty’s marriage to Henry Woolnough.

Six more children were born to Harriet and Henry throughout the years 1861 – 1875, and the family were now 8 living children strong.

On 19th March 1880, Harriet was received into the asylum system aged 44. Harriet was sent to Banstead asylum where she was to spend 19 years of her life before being transferred. I do not have the Banstead records at this time, which are held at the LMA, I will acquire these when possible.

On 7th September 1899, Harriet was transferred to Horton Manor asylum, where she would spend an additional 14 years.

Looking at the patient address book, the husband and sisters are the first entries, but with no visiting dates. This means the known relative information was passed to Horton from Banstead. Horton wrote to these relatives probably to inform them of the move, but we can see both letters dated Sept 1899 were returned, ‘Not Known’. We now know that Henry had died and the sisters had moved.

The medical certificate for Horton (completed on arrival) states;

She is simple vacant & incoherent & very deficient in intelligence & memory. She says her husband is covered with sores & that she cannot live with him. That it is owing to the French war that she has £500 worth of silk. That the French war is in the Bible & that God is not better than other people.

Sarah Wright the paid attendant confirms the above statement.

Facts communicated by others viz:-

Demented, has great loss of memory, is dull and unintelligent in her answers, rambling guarulous and at times quite incoherent.

Harriet was diagnosed with DEMENTIA.

Harriet’s notes from the moment of arrival show the sad decline of a woman with dementia. Constant memory issues and nonsensical conversations, becoming more and more irrational as time went by.

On the Manor address book, we can see husband and sisters entered, but with no dates listed it would appear they never visited but were just known relatives. Harriet did receive visitors though. Albert and daughter Rosie visited once, but daughter Harriet Emeline Ashenden, visited ~annually, from 1903, totalling around 12 times in total.

As shown in the relative/visitor log, we can see her funeral was attended by son George King, and daughters Rosie King (Now Rosie Driscoll) and Alice King (Now Alice Lisle).