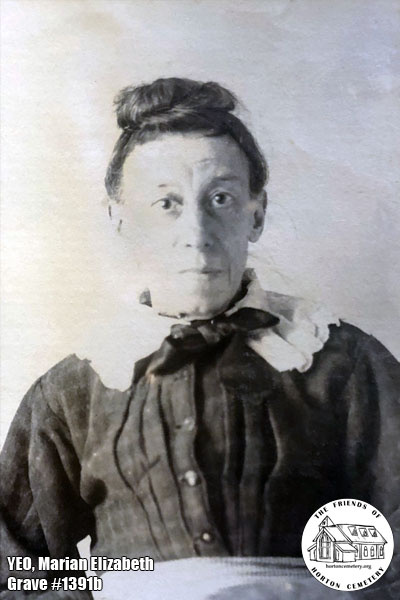 Marian’s father, Thomas was born in Hackney although his parents, Thomas Snr and Mary nee. Maidment both came from the West Country where they married in 1824 in Dorchester.

Marian’s mother, Elizabeth Hambleton was born in Isleworth, Middlesex on 7th Oct 1834 and baptised in All Saints church, Isleworth on 2nd Nov of the same year.  Elizabeth was the youngest of at least five children as shown on the 1851c. Her parents were George and Ann Hambleton, Ann appears to have married twice into the Hambleton family as she is shown as a widow (Hambleton) on their marriage certificate. George is described as a bricklayer.

Sadly, following his wife’s death in 1866 we next find George in the Brentford Union Workhouse in the 1871 census and we may presume he died there in 1873.

Some online trees show this person living and dying in Newfoundland but I am not convinced, a number of the online trees for this part of the family are inconsistent.

I have found an Annie Elizabeth Ridout as an inmate of the Caterham Asylum, Godstone, Surrey in the 1891c. Age 17yrs “Idiot”.  With a death in 1898 in the same area this I think may be our Annie Elizabeth. [update Jan2022] We now have Marian’s hospital record in which it states that she had one sister who had “paralysis and was an imbecile” so I do think this was the correct person. The record also states that one sister and 2 of her brothers died of consumption like their father but we do not have their names.

Marian Elizabeth Ridout was the eldest of her six siblings; she appears to have lived in the same house until her marriage in 1889 – 13 Litchfield Street, St Anne’s, Soho, Westminster. Her father Thomas is constantly listed on the census as a ‘Porter’ and Litchfield Street is listed on Booths Maps as “fairly comfortable, good ordinary earnings” so, apparently a stable upbringing, [update Jan2022] although later her hospital records say that she is unable to read or write and cannot calculate. The record also states that her mother suffered “periods of alcoholic dependence following Marian’s birth” so perhaps not as stable as previously thought.

James was the second son of William Alexander Yeo (1835-1877) and his wife Frances Esther nee Hubbard (1836-1892), William was a gas fitter originally from Wiltshire.

Following their marriage James and Marian lived at 19, Rutland Street Belgrave, shown as “mixed, some comfortable some poor”. This road lies alongside the Belgrave Dock engineering works on Battersea Reach, it is possible that this is where James worked as he is shown on the 1891 census as ‘Gas Lock, Hot water fitter’, Marian has a young child James Frederick b. 9th Feb 1890.

By 1901 they have moved again, across the river to Battersea to 18, Kamballa Rd, which is just off the Falcon Road, Battersea and is again “fairly comfortable, good ordinary earnings”.  James is now saying he is a ‘Blacksmith’ and they have another child, a daughter called Amy Marian b.12th June 1892 who is “afflicted with a curvature of the spine”.

[update Jan2022] Then in Q3 1903 another child Albert Edward was born. According to her hospital records Marian had 8 pregnancies with 4 miscarriages and 4 children born alive, so there is one child yet unknown. By the time she enters the Epileptic Colony in 1911 she states that only 2 of her children are still alive.

Marian E. Yeo appears in Q4-1903 in the British Postal Services appointment book, shown as a sorter or telephone operator but there is no date of birth or address to confirm that this is our Marian. [update Jan2022] This now seems unlikely as we know she was uneducated. Marian’s hospital records show that it was during her last pregnancy that she first developed epilepsy and that she would “drop down without warning and have loss of memory of the event for one or two hours afterwards”.

It would seem that until James’s death they were living quite a good life but sadly James died of consumption in 1910 aged just fifty and was buried in the Battersea cemetery at Morden, Surrey on 15th Nov 1910.  Two years earlier on 9th May 1908 they had buried their daughter Amy Marian in the same cemetery, she was 15 years old.

[update Jan2022] At some point, her health caused Marian to be admitted to the Tooting Home, Church Lane, Tooting Graveney , a workhouse/Infirmary for the ‘elderly and infirm’, which her husband James paid for on a monthly basis.

In that same year, 1911, her youngest son, Albert Edward, aged just 8 years, travelled unaccompanied to Canada on the ship Tunisian to live with his Aunt and Uncle. Albert lived his life in Canada where he married and raised his family.   Marian must have been very ill for this drastic step to be taken.

Presumably, following James’s death in late 1910 Marian’s care became chargeable to the Wandsworth Union and on 16th August 1911 Marian was transferred to Horton Hospital, Epsom, Surrey, part of the Epsom cluster of five mental hospitals built to take the overflow from the Middlesex asylums.

On 23rd October of the same year she was transferred again to the ‘Epsom Colony’ which cared for the “Epileptic insane of the Metropolis”.

Marian is 51 yrs old and her records list her next of kin as her sister-in-law, Mrs. Yeo of 16 Aldina Rd, Shepherds Bush. When Marian is admitted to the Epileptic Colony from Horton it was said that she had been “violent and aggressive toward her attendant”, and she is “incoherently and noisily excited”. Doctors assessed that she “labours under the delusion that she is poisoned” and that she is “unable to feed herself or minister to her own needs”.

A history, taken from her brother in law W.R. Yeo in August 1911 tells us that she has suffered from Bronchitis and Asthma and that her friends put her present illness down to “the change of life”. It is this same person that tells of her families history.

When transferred to the Epileptic Colony, her general condition is poor and she is poorly nourished. She is a small woman, just 4’ 10’’ with brown eyes; she has a heart disorder, poor teeth and chronic Bronchitis. Mentally she has a good memory but “probably does not appreciate the nature of her surroundings”. It is here that we learn she is uneducated. She says that when she was admitted to Horton she believed she was going to be operated on and “was to be chloroformed” and that she fought and struggled. Since being admitted (to the Colony) she has been quiet, clean and willing to help.

Marian’s case notes state that she suffers from ‘Epileptic Insanity’ although it would seem that her fits were quite mild and occurred mainly at night. She is called ‘weak minded’ and although in moderate health her ‘mitral disease’ is noted and although no abdominal tumour can be felt the possibility of Uterine Cancer is not dismissed.

Marian remained in the Colony for just under 6 months and during that time her problems increased with the cancer being confirmed. Her mental state also deteriorated and by January 1912 she is said to be “demented, dependent with impaired memory”. Things continue to go downhill for Marian with her heart and bronchial conditions worsening.

On 16th April she had a minor fit during which she bit her tongue, causing it to swell which gave her difficulty in swallowing and after further deterioration, Marian died at 7:50am on 18th April 1912. Marian’s death certificate gives her principle cause of death as Mitral Stenosis and contributory cause as Carcinoma.

The eldest of Marian and James’ children was James Frederick born 9th Feb 1890 at 19 Rutland St, Pimlico.  By the time of the 1911 census his father and younger sister had died, his mother was ill and hospitalized and his youngest brother Albert was an inmate at the Swaffield Rd, Intermediate School, which I believe was part of the Wandsworth workhouse.

James is found as a boarder in Battersea, his occupation is listed as a Mason’s labourer.  James reappears when he serves from 1914-1920 in the London Regiment Tank Corps sadly we only have his medal roll.  During this time James marries for the first time to Hilda Violet Edith Cove Robbins in Jan 1916 at St Martins (in the fields?) London.   They have three children together but only the eldest girl survives.

The family move to Guildford, Surrey and James becomes a bus conductor, and then in Oct 1934 Hilda dies.   Two years later in Oct 1936 James marries again to Nancy Forehead and together they have three more children.  In the 1939 Register we find the family living in Hillspur Rd, Guildford.    James dies in DQ 1958 in the Guildford area, age 68.

[updated Jan 2022] The story of Marian Yeo is sadly one of a woman of her time. Uneducated, and, although seemingly with a good husband, she carries and loses many children in her 22yr marriage which must have taken its toll mentally and physically. Treatments for her Epilepsy which would be routine today were unavailable and the term “Epileptic Insanity” was regularly used. Sadly we also see her problems attributed to “the change of life” a ‘cover all’ term for the problems of the menopause which were not understood. With her care passing to the local union on her husband’s death, being sent to an ‘Asylum’ became inevitable. The Epileptic Colony at Epsom was relatively new and the care was more up to date and caring than many places but sadly Marian’s health had gone too far.

Some of the basic information used to start the Yeo Ancestry tree (names/dates,) was taken from a public tree on Ancestry called the Figg FT.

Building the developing the Yeo tree I checked all this info and followed up on the ‘hints’ Ancestry presented as well as searching Ancestry records.  It was suggested that I contact the owner of the Figg FT and explain what we were doing in the hope that they might be interested but sadly on receiving my email they made the tree private.