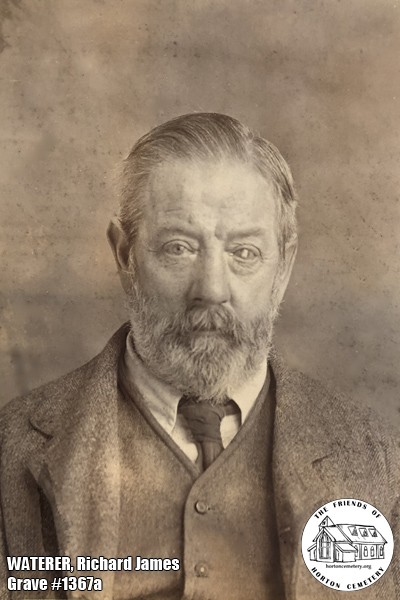 Parents James and Catherine were married on 12 August 1839 at St Mary’s Church, Lambeth. James was born in Ockham, Surrey and there are many Waterer families in the Surrey area, repeating the Christian names we see in this family. Catherine came from Goring Heath, Oxfordshire.

In the 1841 census James and Catherine are living in Robinson Place, Stockwell. They had just lost their first son James, buried 3 Jan 1841 age 5 days but a 2 month old, unnamed child is shown. The 1841 census was taken on 6 June making the child’s birth in April, just 4 months after James’ birth. No 10 year old child appears on the 1851 census so this is entry is all rather confusing.

Sadly, in Sept 1849 James senior died of Phthisis (Consumption) aged just 33yrs, he is buried at St Mary’s Church, Lambeth. Records taken later (1903) when Richard James was admitted to Ewell Colony state that both his parents and three sisters died of consumption. Lambeth was a low lying area right by the river and the poor, crowded conditions led to a high in rate of this illness.

By the time of the 1861 census, Catherine and William Browne are living in Bedford Cottages, Brixton and the only child still living with them is 8yr old Ann Catherine Browne. Sarah Ann and Richard James are both servants elsewhere and no record is found for Esther. Anne Catherine (1852-1884) married and had two children.

Richard James married on 24th April 1870 to Ann Gowers at St Saviour’s Church, Ruskin Park, Lambeth; they were both living in Lewis Road, a mixed area of comfortable and poor residents. Richard is described as a ‘Coachman’ possibly still working for George Davis.

No census can be found for Richard and Ann in 1871 but by 1881 they and their growing family live at 45 Lilford Rd, Brixton, which was said to be “mixed-fairly comfortable”. Richard was still a ‘coachman’ and they now had three children, James Joseph 9yrs, Charles Edward 4yrs, and Richard George (RJ?) 16 months. Another son, John Frederick had been born in 1873 but sadly died in 1874.

No census is found for 1891 but we later learn that in about 1895 Richard fell 20ft onto his head, breaking his leg and injuring his shoulder, he was treated in St Thomas’ Hospital and was reported as ‘strange afterwards.’ Perhaps this is when things began to go wrong for Richard and Ann as in Sept 1898 he is admitted to the Wandsworth and Clapham Infirmary and soon after we find him admitted to the new County Asylum, Bexley, Kent which had opened in 1898.

Richard is shown as a patient in the 1901 census. Richard’s occupation is given as ‘Barman/Potman’ presumably his illness had caused him to stop his work as a coachman and take unskilled labour.

The 1901 census also shows Ann and three of her sons are living at 98, Kingswood Rd, Clapham. Charles, now 25yrs is a ‘Gardiner/domestic worker’. Richard George 21yrs is a ‘Green grocers assistant’, and Ernest 19yrs is a ‘shop assistant’. The family appears to be doing well despite their recent problems as Booths rates the area as “fairly comfortable, average weekly wage “.

We can see that Richard was at Bexley until 19th Aug 1903, this is the only time that Richard appears in the Lunacy Register. The 1903 lunacy records are not available online. However, from the paper records we know that on 19th Aug 1903 Richard was admitted to the Ewell Epileptic Colony as patient #1 by son Charles Edward, and lived in Pine Villa where he worked in the kitchens. He was considered ‘pleasant, a good steady worker’.

When admitted it is stated that he suffered from ‘alcoholic Dementia associated with Epilepsy’ his fits beginning when he was 52yrs old. However, twice in the same notes it is said that he was a ‘moderate drinker in beer, took but little spirits’ and that he ‘denies being an excessive drinker.’ As we can see from the photo of Richard (If you are on the mobile version of this site then click the three dots to the top right of screen), it is also noted his “left eye blind, cornea occupied by scar”.

The ‘Ewell Epileptic Colony’ opened in 1903 to cater for the “Epileptic insane of the Metropolis” and offered some new treatments recently available. Richard had transferred once again into a new facility as their first patient. Patients contributed to the whole of the cluster by working in some capacity in the laundry or the bakery or kitchen or outside in the garden or on the farm.

As time passed he was still in ‘fair health’ apart from his fits, but with a steady decline in his mental capacity until he died at 9pm on March 17th 1912 following a fit. The post mortem gives cause of death as ‘Hypertrophy and fatty degeneration of the heart and general Arterio-Sclerosis.’

Richard was buried on 23rd March in the Horton Cemetery in grave ref #1367a.

It seems that Richard James was a man who worked and kept his family well until he was struck down by illness and had to be admitted to an asylum. His wife Ann appears to have maintained her family and continued to call herself “wife” until Richard died in 1912. I look forward to discovering if the family kept contact with him during his time in care.

Richard’s Epileptic Colony records show that he and Ann had 7 children, but that 4 now survive (August 1903).

No definite date of death has yet been found for Ann.

James Joseph was born on 30th July 1871 and baptised at St Saviour’s Church, Ruskin Park, Lambeth on 3rd Sept, 1871. He married in the Edmonton Registration District in the 3rdQ of 1896 to Jessie Agnes Dixey and together they had four children. Jessie Dorothy 1897-1910, Violet Beatrice 1899-1959, Eleanor Gertrude Maud 1903-1994, Harold James 1907-1978. James and Jessie continued to live in Southgate, Edmonton, Middlesex where in the 1901 census he is shown as a “Gardiner/domestic worker” living with his wife and two children, Jessie 5 yrs and Violet 1year.

Charles Edward was born 14th April 1876 and baptised at St Saviours Church, Ruskin Park, Lambeth on 7th May 1876. He married on 25th Dec 1902 to Elizabeth Rebecca Lantaff at St John the Evangelist, Brixton, Lambeth, they do not appear to have had any children. The 1911 census finds them visiting, possibly lodging, at 63a Kingswood Rd, Clapham, when his occupation is given as “Gardiner/domestic”. Charles served in WW1 in the 2/6 Norfolk Regiment from 1915 until the end of the war when he was awarded a medical pension. No definite date of death has been found for Charles but his wife Elizabeth died in April 1962 age 92yrs.

Richard George was born on 10th May 1880 and was baptised at St Saviours Church, Brixton on 6th June 1880. On 21st June 1903 he married Annie Louise Philips at St Saviours Church, Brixton, his brother Charles was a witness and signed the register in a very nice hand. Richard and Annie had just one child, a daughter called Florence Emily Katherine born 23rd Sept 1903 and baptised at All Saints Church, Clapham Pk, on 18th Oct 1903. At this time Richard and Annie were living at 98, Kingswood Rd, Clapham. The 1911 census shows the family still living in Kingswood Rd, Clapham but now at No 74, Richard is shown as a “Fruiterers Assistant”. Richard was called up in WW1 and despite some health problems served in the Labour Corp from 1917. 1939 register shows Richard as a Factory watchman living at 74, Kingswood Road, Clapham with his wife Annie and daughter Florence. It seems that Florence remained unmarried until her death in1966. Richard George died in the 1stQ of 1945 aged 64yrs.

Ernest William Gower was born on 17th April 1882 whilst the family were living in Lilfield Rd, Brixton, he was baptised on 7th May 1882 at St Saviours Church, Brixton. By the time of the 1911 census Ernest is the only child still living at home, now at 28 years he is a “Stationers assistant” and he and Ann are living at 74 Elm Park, Brixton Hill. On 27th August 1911 he married Mary Jane Castle at St Leonard’s Church, Streatham, both gave their address as 17, Wellfield Rd, Streatham. The 1918 absentee voters list says that Ernest was a Pte in the Royal Fusiliers but no other military record can be found. In 1936 Ernest and Mary Jane were living in Ladbroke Grove, Kensington and we believe he died there 1stQ 1937 age 55yrs.

Richard and Ann’s offspring produced remarkably few children; they lived for most part in the Clapham and Brixton area, at times living alongside each other which suggests they were a close family. Although most were in relatively low skilled jobs they seem to have maintained a comfortable life.