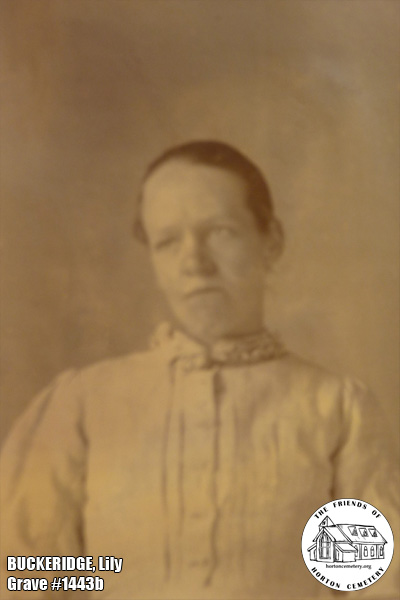 Elizabeth had been married first to Peter Pharaoh, at St Giles Church in Camberwell, on 3rd Sept 1864 but Peter died in 3rd quarter 1867, leaving Elizabeth aged 27 years, a widow with a small daughter called Rose Anne.

They appear in the 1871 Census living with Elizabeth’s married sister Sarah and husband Clarence Clark. The 1881 Census shows Rose Anne (niece) living with Robert and Louisa King. It would appear that she never lived with her mother after she married John Buckeridge.  Rose married in 1887 to Frederick Barnett and had one daughter, Rose Louisa.

John and Elizabeth Buckeridge were married for 8 years before Elizabeth’s death in 1879, during that time they had three children:

The 1881 Census shows them living at 15, Egmont Street, Hatcham, Greenwich and John is shown as a widow. His occupation is given as ‘Manchester warehouse’ indicating that he was still employed in the cotton business.

On the previous census, before his marriage, John had been living in the establishment of Thomas Pryer, draper/ importer at  45, King William Street, London Bridge. He is shown as an ‘Assistant linen draper’, one of twenty four people working in that establishment. At this time in England, cotton was king and vast numbers owed their livelihoods to the trade in one form or another.

It was in 1881 that we find Lily admitted to the “Cold Blow Lane “temporary school in Lewisham which confirms her date of birth. Egmont Street, according to Booths  Poverty Maps was, “fairly comfortable “and the census shows that they were the only family living at number 15 and that they employed a servant.

In 3rd quarter of 1884 John Thomas married again to Mary Horn Perkins and by the time of the 1891 Census they are living in Tappesfield Road, Camberwell.  John is now working as an ‘Assurance Agent’, a job that he does for the rest of his working life.

Mary and John now have three children of their own. Their eldest, Mable Jessamine Mary born 1885 was staying with her grandmother Mary Perkins on census night.

At home we find Minniesent Camelia born 1886 and Frederick Stanley born 1889. Clarence William, John’s son is also living with them but Lily and Violet have moved out.

Lily as an adult

We find Lily in the 1891 Census, aged 18 years, working as a housemaid at the ‘South-eastern District Hospital’ a large fever hospital is Deptford.

In 1901, aged 28 years she is again working as a housemaid at 1, Barforth Road, Camberwell, Surrey, the home of Mr John Marsh, a shipping clerk.

This is when life seems to change for Lily who until this time appears to have been in regular work. Later that year, on 22nd October 1901, we find her admitted to the Constance Road workhouse as “mental.”

On 8 Nov 1901, she is transferred to Banstead Asylum in Surrey.

Lily is discharged from Banstead on 17th October 1902 “recovered” but in 1907, we find her admitted to Horton Asylum, Epsom. Where was she during those intervening 5 years?

In the information John Buckeridge later gave when Lily was admitted to the Colony she was “treated at Paddington (WH) six years ago” so possibly that is where she was cared for.

The 1911 Census (below) shows us that Lily was still in Horton and states that she was 31 years old when she first became unwell.

Work began on the infrastructure for Horton Asylum in 1897, but almost  immediately accommodation was needed for 700 female patients “of the  comparatively harmless class”. As a stopgap measure, the old Manor House was renovated and turned into staff accommodation. A number of ‘temporary’ buildings were dotted around the original manor house to house the seven hundred women.

Lily is transferred from Horton straight to Ewell Epileptic Colony on 23rd November 1911.

‘The Ewell Colony’ opened in 1903 to cater for the “Epileptic insane of the Metropolis”. It offered some new treatments only recently available in a more homely environment.  Patients contributed to the whole of the cluster by working in some capacity as dressmakers, in the laundry, the bakery, kitchen or outside in the garden or on the farm.

Lily’s Life in the Ewell Colony

On admission to the Colony Lily’s case notes state that she was not epileptic but that she was violent and dangerous.

Her father John Buckeridge (living at 23, Stuart Rd, Peckham Rye) said that until her accident Lily was earning her own living and had not lived at home for 25 years so she must have moved out soon after John’s second marriage. She was an abstainer and of steady habits before her accident.

Very strange in manner, difficult to get her to speak.”  “She thinks she is very wicked and says that God’s on guard”. The attendant from the Paddington WH said, “she often screams out, is often praying, refuses to answer any questions, ties her hair tightly round her neck, smashes anything she can get her hands on and refuses food.

On admittance her general condition is ‘fair’ with no tremors, good co ordination and normal speech and hearing. It is noted that she has brown hair and blue eyes but that most of her teeth are missing and she wears a denture, not unusual in those times.

The doctor says that she is very nervous and apologetic in manner. She has poor reasoning but no hallucinations or delusions; she is quiet, clean tidy and a good needlewoman.  Only one fit has been recorded (which she denies) Her diagnosis is Terminal Dementia.

In January 1912, Lily says that her father is “willing to take her out,”. Could this be a day out or to take her away from the Colony? Sadly no visits from her father are ever recorded in her time in the Colony or previously in Horton. At this time she seems to be stable and again it is noted that “she does not appear to be epileptic.”

By Jan 1913, her mental condition has deteriorated. Over the next few months she becomes more disturbed until, in October she is “back to usual, works at her needlework in the villa. She is obedient and quiet.”

Over the next few months she slowly starts to deteriorate mentally with her memory and reasoning noted as “impaired.” Her “large depressed scar on forehead and some paralysis of left leg” is referred to again but again it is noted that she is “free from fits being non epileptic.”

From April of this year Lily had recurring problems which led the doctors to state in early December, “probably ascending nephritis,” (Kidney disease.)

Her physical health continues to decline and on Dec 20th at 1.40am she complains that she is unable to move her limbs.  A sudden change occurred at 1pm and she died shortly afterwards.

A post-mortem concluded that death was caused by “Tuberculosis of the kidneys and Cerebral softening of the brain (very old).” Presumably the result of the fall she had in her younger days.

In 1901, when Lily was in Banstead Asylum, the family were living in Stuart Road, Camberwell not far from Peckham Rye Common. Three more children had come along. Albert Edward was born 1893, Ivy Winifred born 1897 and Arthur Victor born 1900. Ten years later they moved to Limesforth Rd, Nunhead and all the family were by then now in work.

They are all doing well and living in a newly built six roomed house.  Sadly, young Arthur Victor had died age just 2years in 1901

Violet died a spinster in Lewisham Hospital in 1956 leaving her estate to her brother Frederick. She was also buried in Southwark on 5th July 1956.

Clarence married and moved to Kent where the 1939 Register shows him and his wife as “peddlers”. He died on 20th May 1955.

Mable remained unmarried, became a teacher and lived all her life in the Camberwell area dying in January 1983.

Minnie married Arthur Addison and by 1939 they were living in the Croydon area, where she died on 5th Apr 1975.

Frederick married Emmeline Elsie Addison (possibly related to Arthur) and they seem to have had four children. He worked in local government and died in 1984 in Fareham, Hampshire.

Albert was a sailor according to his marriage certificate and later, in 1939 Register was found living in Esher, Surrey. He was killed in August 1944 whilst on duty as a ‘fire guard’ in Kensington Park Rd and was buried in Lambeth Cemetery on 24th August 1944.

Ivy married Stephen Mills in 1923 but the 1939 Register states that she was divorced.  She died just days before her brother Albert and was cremated on 18 Aug 1944, under her married name leaving her estate to Frederick and his son Ronald.

At no time during Lily’s stay in the Ewell epileptic colony did anyone suggest that she had epilepsy, even on her death cert it is not mentioned. In fact it was repeatedly stated that she was not epileptic so I do not understand why this young women was place there. It seems clear that the fall from the window had serious repercussions for Lily who came from a good family and had done well at school it must have been a terrible shock when she was admitted to an asylum and you hope that they maintained contact with her during the few years she had left.