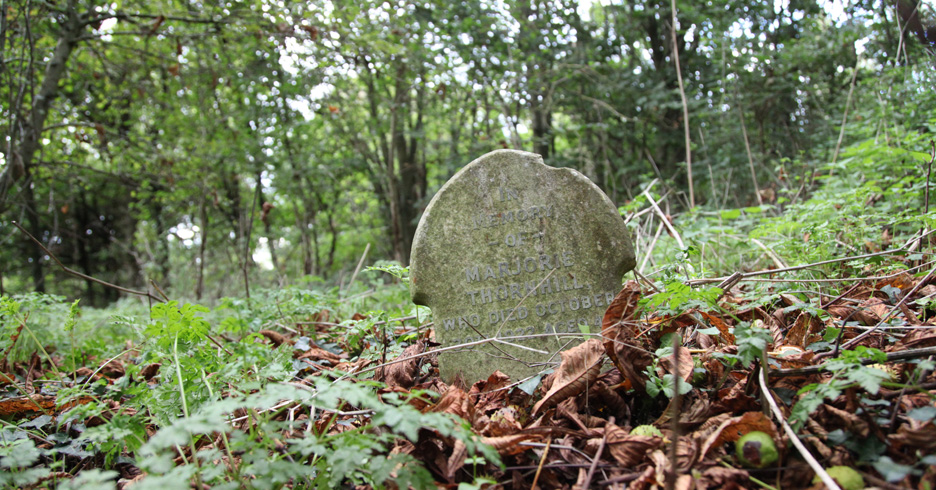 The details of the people buried in Horton Cemetery are summarised in the cemetery burials register in the Epsom & Ewell History Explorer website. These records have been used by our Volunteers (listed in the Friends and Patrons section) as the basis of their research.

There are some burials of special consideration such as:

As we recognise more people of note they will automatically be added to this list.

Of the few remaining gravestones, which have since been removed, only four could just about be made out. They were:

The grave shown in the image above belongs to Marjorie THORNHILL and is the only remaining gravestone on the site, hidden amongst the undergrowth.

At least three of the Epsom Cluster Hospitals were used during and after World War One as military hospitals.

Horton Asylum, The Manor Hospital and Ewell Epileptic Colony (St. Ebba’s today) were designated as a War Hospital and more than 45,000 military personnel passed through from 1915 until the end of 1920.

During this period, with the exception of one CWGC recognised WW1 soldier buried in Horton Cemetery, named P. McMahon, all other serving military personnel who died in the hospital were either buried in Epsom’s Ashley Road cemetery, or their bodies were claimed by family or other interested parties and were buried elsewhere.

From 1939 until sometime in 1947, Horton Hospital was again designated as a War Hospital. During this period civilian patients were not treated in the hospital. Epsom’s Ashley Road cemetery was again used for the bodies of serving military personnel. Again, for some unknown reason, there is a single CWGC recognised WW2 soldier buried in Horton Cemetery, that of Henry Walter JAMES.

Between 1943 and a point after the end of World War Two, 400+ Polish military personnel who fought under British Command were admitted to Long Grove Hospital as psychiatric patients.

Further research, perhaps a project in its own right (anyone for a PhD?), will be necessary to discover whether the 60+ Polish WW2 soldier buried in Horton Cemetery until its closure in 1955, warrant Commonwealth War Graves Commission recognition.

Most if not all Polish military personnel who died in the Epsom Cluster Hospitals prior to May 1948, about one third of all admissions, were claimed on behalf of the Polish Government and buried under Polish Forces headstones in British military and civilian cemeteries. Verification of this may also be part of this further research.

This research may also apply to military personnel from other nations, e.g., Czechoslovakia, who fought under British Command and whose bodies were not claimed, resulting in a burial at Horton Cemetery.

On 06 July 1983 local solicitors Kirkwoods, acting on behalf of the freeholder, sent the Registrar General of Miscellaneous Records, St Catherine House, a list of tombstones and memorials removed from the cemetery.

Schedule of all the tombstones and memorials set in a vandalised paved area inside the previous entrance from Hook Lane which, having been broken and defaced, were removed from the Cemetery on the 26 May, 1983, in accordance with Clause 9 of the Schedule to the Disused Burial Grounds (Amendment) Act 1981. There being no evidence of any other such memorials existing in, on or around the  cemetery.