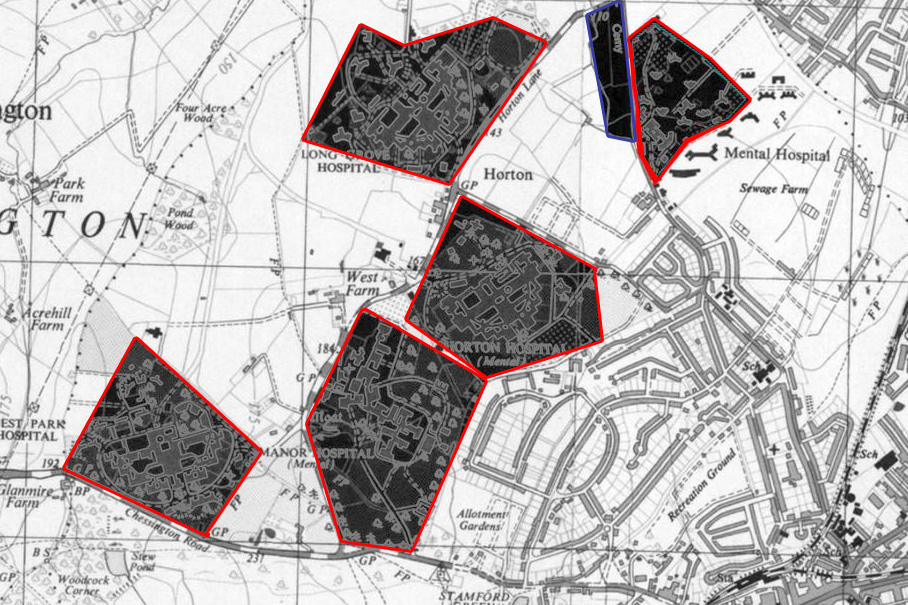 The Friends of Horton Cemetery focus on the people buried at Horton Cemetery, but it is useful to include here some details about the cluster of hospitals in which these people spent their final days.

The Epsom Cluster of mental hospitals, also referred to as the Horton Estate, was a group of five large psychiatric hospitals situated on land to the west of Epsom. There are many sites which offer an outstanding amount of information on the “The Epsom cluster” but here is a brief overview.

The hospitals were built by the London County Council to alleviate pressure on London’s existing lunatic asylums, which had by this time become overcrowded. The County Council continued to manage them until they were nationalised, becoming part of the National Health Service in 1948.

The Manor Asylum (Epsom) or Manor House at Horton was originally meant as a temporary asylum, whilst Horton Asylum was built. Building may have begun in 1896. The asylum was opened in 1899. It consisted of the existing Manor House for staff, and corrugated iron buildings for patients. The scheme was disapproved by the Lunacy Commission, but approved by the Home Secretary. The architect was William C Clifford Smith, the Asylum Committee’s chief engineer.

It was opened for 700 female patients of the “comparatively quiet and harmless class”. Provision made for about 60 female private patients at a weekly charge of about 15/- (not including clothes)
By 1901 approval was given for extra accommodation for 110 male patients required for manual labour power.

Long Grove Asylum, at Epsom built 1903 to 1907 and opened in June 1907. Tenth London County Asylum and fourth in the Epsom Cluster. It became Long Grove Hospital, Horton Lane, Epsom, KT19 8PU.
Architect George Thomas Hine. A replica of Horton with differences to make it (a little) more like a Maryland, USA plan that was favoured. In the design, 500 beds were moved from the main (zig-zag) crescent to autonomous villas, each with its own unfenced garden.