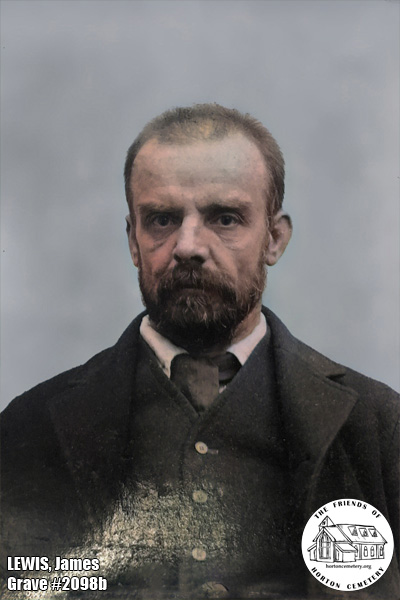 James was born on 30 September 1859 in the Camden Union workhouse and at his baptism on 19 Oct 1859 his mother is shown as Elizabeth Lewis, Bootbinder.

Despite having six children together I cannot find a marriage for his parents, Elizabeth Cook (1829-1917) and James Lewis (1929-85.) Their children were:

In the 1861 Census James is just one year old and is living with his parents and older brother William at 6, Brill Terrace, Somers Town, St Pancras, later in life William uses the surname Cook.  A baptism for William Hurle Cook shows his father as John Cook; mother Elizabeth Cook, living at Little Exmouth Street, Somers Town, St Pancras, Shoemaker. We may think this a clerical error or perhaps, John Cook is the reason that Elizabeth and James Lewis were never able to marry?

Or, could there possibly be a connection with the John Hurle, head of the household where Elizabeth was a servant in the 1851 Census (see below)

From the ‘61 Census we can also see that James Lewis Snr was born in St Pancras district. No definite birth/family has been found for him but we have a 12 year old James in the St Leonards workhouse in the 1841 Census which is a possibility.

James’s wife Elizabeth came from Bampton, Witney district, Oxford, her parents were James and Joyce Cook and her father was a Stone Mason.

Ten years later in the 1871 Census John and Elizabeth’s family has increased to included George, Mary Elizabeth and Elizabeth Jane. They are now living at 29 Exmouth Street, Somers Town, St Pancras which is shown on Booths poverty maps as ‘a very poor area, casual, chronic want.’ It now sits just behind the Francis Crick Institute and the new British Library.  In the twenty plus years they lived at this address there were always twenty three tenants living in the property.

Just one more child is added to the family. In 1871 Charles is born and in the following census of 1881 they are all still living in Exmouth Street, now both James Snr and our subject James Jnr are shown as ‘shoemakers’ but sadly the print of the census is so poor that it is hard to make out the occupations of the other family members.

The following decade brings much change.  James Lewis Snr died. The most likely candidate died in April 1885 and is buried on April 14th in Hampstead Cemetery, Camden.

In the 1891 Census Elizabeth, now a widow, is still living at 29, Exmouth Street, St Pancras with her son James, and at the same address we find her daughter Elizabeth Jane, now married to John Bowry, and their two year old son, John.   Elizabeth’s eldest son William is now married and living in Gateshead, Durham and her daughter Mary Elizabeth has recently died (Jan 1890) in St Pancras Workhouse ‘Insane’.  George and Charles cannot be identified on the census.

Following the 1891 Census James disappeared for a time, but we now know from his hospital records that he had already spent some time in the Caterham Asylum (Jan–Nov 1890,) following the sudden death of his sister which “upset him greatly.”   He then spent a few years at home but was admitted in about 1896 to Hanwell Asylum and it was from there that he was finally transferred to Ewell Epileptic Colony in 1903.

James remained an inmate of The Epileptic Colony until his death in 1912 and is shown here on the 1911 Census.

He is single and his occupation is “shoemaker.” There is some disagreement about when his Epilepsy began but it is recorded variously in his thirties which is not what his mother says when she gave his history on his admission papers.

James’s mother says that he is one of six children but she states that his sister, Mary Elizabeth, had fits from 5 years old and “went raving mad” in 1890 and died on 5th Jan 1891 “insane.”

Elizabeth says that his birth and development were normal although she then says that he had fevers at 5 years and 7 years, “brain trouble” aged 9 years and fits aged 10 years, when he was treated at Queens Square, the new Neurological Hospital.  Despite this he was able to earn a living.

The ward superintendent that has accompanied him from Hanwell Asylum says “his attacks are frequent and after each he is violent, excited and uses obscene language.”

The doctor’s observations on admission are that “he laughs inanely when spoken to, is simple and childish and does not know which month or year we are in”

Physically he is in fair bodily health and he has brown hair and green/brown eyes. He has well formed features, clear speech, good hearing and is steady on his feet but he has a “dull” expression.

Mentally he is clear enough to say that he is a “cobbler or snob.” not a shoemaker, but when asked what day it is he says “they call it Sunday here, at home it would be Wednesday.” He is said to be truthful and has “good family affections.”

It is noted that his sister and two paternal uncles were “insane,” and died in asylums, one in Caterham and the other in Colney Hatch.

His diagnosis was Epileptic insanity, hereditary.

In January 1904 James is set to work in the boot making shop where he is “usually well conducted” but sometimes “just lies down and does nothing.”

As the year progresses he becomes “irrational, easily upset and quarrelsome” and his work suffers but he settles again and this seems to be the pattern for some time.

The following year appears to have been difficult with, “marked hallucinations on which he founds numerous delusions.” His behaviour and language deteriorate and he makes false charges against the attendants and other colonists, eventually in July of 1906 he is involved in a violent incident on the ward.  When another colonist was being attacked the assistants and a fellow colonist were trying to stop the fight, James began shouting and trying to interfere and was knock down and had to be taken to a side ward but has recovered by the next morning. He appears cheerful and quiet again and says he is “feeling pretty well in his head” however, he has recently is been described at “morbidly irritable, morose and confused.”

James’s condition seems to remain relatively steady for the next few years although his seizures are increasing in number and severity leaving a marked deterioration in his mental state.

At the beginning of 1911 he has some health problems and his mental state seems to become worse until, in April of that year he is recorded as, “in a state of mania today” and “incoherent, singing and restless, hallucinating and replying to voices.”  This continued through to June when he is “recovered from recent maniacal bout” and back on his ward.

However in Sept the doctor reports that his seizures are causing “pretty bad falls” as there is “no Aura” (warnings signs) but he is still working.

In April 1912 he is “sent to hospital following a fall, excited, confused, incoherent and wandering.”  James remains in bed until June when he is up again but not working.

On Nov 9th he is complaining of pain in his right food and they find an abscess “probably due to a nail in his boot” it is treated but cellulites spreads and he dies on Nov 26th at 2.35pm when it is noted that he has a “small patch of gangrene on right foot.

Following a post-mortem the principle cause of death is given as “Carcinoma of the head of the pancreas and liver” with contributory factors, “Gangrene of the foot and Arterio sclerosis”

The Ewell Epileptic Colony, now St Ebba’s Hospital, was opened in January 1903 to care for the “Epileptic insane of the Metropolis.” Built to the modern design of a community of small villas it tried to remove somewhat the stigma of the asylum.  Patients worked if they were able, on the farm and gardens or in the bakery, laundry, kitchens, boot makers, dressmakers or weaving shops all of which supported the five hospitals that made up the ‘Epsom Cluster’ which had  been built, initially to house the overflow of patients from Middlesex.

We know that by 1901 John Bowry, his wife Elizabeth Jane and their family have moved out to Hendon, hopefully a nicer area, and they have taken Elizabeth Jane’s 72 year old mother to live with them.  However, in 1903 we find an Elizabeth Lewis ‘bootbinder’ admitted to St Pancras Workhouse, “passed on by Islington”.  Could this be James’s mother? Not an uncommon name as she is one of four women called Elizabeth Lewis on this one page.

In the 1911 Census we find that Elizabeth is now in the Brentford Union Infirmary and we can assume that is where she died in the 3rd Q 1917, in the Isleworth Registration District.

William Lewis/Cook born 1857, known as William Cook, married in Sunderland in1889 to Mary Ann Murray who was born 1861 in Berwick on Tweed and they lived the rest of their lives in the Durham area.  William was also a shoemaker but later in the 1911 Census he calls himself a ‘boot maker, dealer’ and works from home.  They had four children, Robert, Elizabeth, Charles, and Mary.  William died in 1st Q 1932 and Mary Ann in 3rd Q 1944 both in Durham.

Sadly, their son William Charles died aged 19 years in 1917 and is buried in France.  John Bowry also served in WW1 in the Middlesex Regiment and according to his attestation papers in 1915 he was “separated from his wife who was living with another man.”  In 1919 John re-enlisted into the Labour Corp, Chinese.

Elizabeth Jane died in 1928 and is buried in Brompton Cemetery.

James’s family came from the very poorest area of London and lived in poverty for the early part of their lives but, apart from having many of her children in the workhouse James and Elizabeth seem to have kept their family together and out of dire need which might have led them back there for support. Thankfully most of James’s sibling’s went on to improve their lot in life.