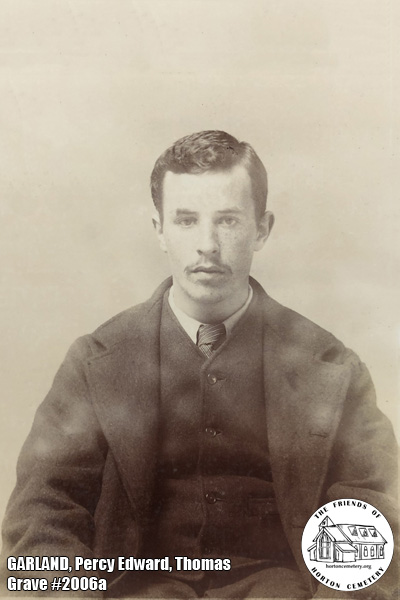 Percy Ernest Garland was born in Blackheath, Kent in the 4th Q of 1882, the fourth of six children. No baptism has been found for him or any of his siblings:

The 1881 Census taken before Percy’s birth shows Charles and Sarah living at 23, Collins Street, Lewisham, just behind Blackheath railway station. They have two children, William 4 years and Fanny Maud Victoria 3 years. They also have two ‘boarders’ living with them. On the Booths Poverty Maps the road is shown as “fairly comfortable, good average earnings”

Percy’s father Charles died at the age of 36 years in Dec 1888 leaving Sarah pregnant with a young family to provide for (so likely a sudden death).

In the 1891 Census she is said to be ‘living on own account’ at 27, Lee Road, Charlton, Greenwich, with William, now 14 years, Maud 13 years, Lily 3 years  and Frank 2 years. Joseph is missing but is found in the District Orphan Working School in St Pancras  situated in Maitland Park, Haverstock Hill, NW London.  Interesting information can be found at  http://www.childrenshomes.org.uk/HampsteadWorking/

There is no mention also of Percy who would now be about 8 years old.  Later hospital records give the onset of Percy’s Epilepsy variously as 6.5 years old or 10 years so possibly Percy was already receiving care of some sort and not living at home.

The Lunacy Register shows that on 7th August, 1900 Percy was admitted to the Claybury Asyum, Ilford, Essex,

and it is here that we find him in the 1901 Census when he is noted as previously a gardener and a ‘Lunatic’.

Percy remained here until 26th August 1903 when he was transferred to Ewell Epileptic Colony.  His details on admission were given by his mother Sarah who gives their address as 2, Park Row, Charlton, the same address that is shown on the 1901 Census record for Sarah and her remaining family.

On his admission to the Colony Percy is just 20 years old, he is single and a labourer.

His mothers confirms that  his fits started aged about six and a half years old with no warning following a normal birth and early development. He reached the 5th standard in school when he was 11 years old.

On examination Percy is said by the doctors to be in good bodily health, with grey/green eyes and brown hair. He is clear in his speech and completely conscious of his situation.   He is said to be somewhat dull but able to multiply by two. He has a fairly good memory but can be ‘turbulent’ and looses his self control and quarrels.  He is sociable and a non drinker.

He is diagnosed with “Epileptic Insanity.”

Early reports say that Percy “conducts himself well” and he is a “fair if not persistent worker.” By the following year, 1904, his fits seem to have decreased but his behaviour has become worse. He is said to be “wilful, unstable and requires a tight reign to keep him obedient, can cause scuffles.”  This behaviour continues through until September when he seems to improve and is “working better, more willing, sociable and pleasant.” However by November his fits have increased and become “very severe although he soon recovers and is doing well, no trouble.”

In 1905 he begins working on the farm as his physical health is said to be “robust” but by May his is set to work weaving and he continues with this work on and off all his years in the Colony.  The following year Percy starts to complain of chest pain but nothing is found, he is checked again in May but again no abnormalities are found.  It is noted in August that there is a marked decline in his fits.

Percy is said to “like variety in his work,” if put out by anyone he will “take himself off into a corner and read until his displeasure has worn off. His intelligence has improved to a certain extent, being able to pick up anything fairly quick.”

By the end of the year he is back working on the farm but in the new year, 1907, his fits are increasing and he is complaining of chest pain, praecordia (the muscle that separated the heart and lungs from the abdomen) but there are no physical signs.

Throughout most of his time in the colony he is described as weak minded, childish, docile and well behaved and in May of this year he is “forced of having teeth pulled and appears to be little sensitive to the pain thereof.”  But in 1908 he is “suddenly violent toward a fellow colonist after words were exchanged,” seemingly out of character although he had been described as “overbearing towards fellow colonists” at one time.

Percy returned to work on the looms but some months later is again complaining of pain on his left side. The doctor says that he has become “duller and slower mentally over the last quarter.  He continues in this way until July 1910 when it is noted that he is complaining of “recurrent erythropsia (temporary distortion of vision causing a red hue) which used to act as an Aura (warning sign) but now comes alone.”

He falls and breaks a front tooth in January 1911 and his hands are showing severe Cyanosis, he is complaining of feeling weak and is sent for bed rest.

The 1911 Census  says that Percy was previously a general labourer and a “lunatic from birth”.

In Sept it is reported that he is sent to bed in Pine, he appears to have definite Aura prior to fits which cause his “right hand to clench and arm is drawn up; if he can lay his had flat on the table and get somebody to press it out flat the fit is averted.”

By January 1912 Percy’s fits are becoming more frequent and there are attacks of excitement and loss of control at times.  His mental health deteriorates throughout the year until in August it is reported that “he does little work”

Sadly at this point we find the frustrating note in the case book “see new ledger” and to date these new ledgers have not been found. Another irritation in Percy’s story is that there is a section in the case notes where the doctor reports on the death of the patient but, presumably due to the “new ledger” this section has not been completed so we do not know the exact date or what caused Percy’s death.

Percy died aged 32 years in the 1st Q 1916, probably at the very end of January, as burial usually took place within a week.

The Epsom Cluster comprised five asylums built between 1899 and 1924.

‘The Colony’ opened in 1903 to cater for the “Epileptic insane of the Metropolis” and offered some new treatments recently available, and a less institutional living arrangement where the ‘colonists’ living in small villas.  Patients contributed to the whole of the cluster by working in some capacity in the laundry or the bakery or kitchen or outside in the garden or on the farm.   https://eehe.org.uk/?p=61363

Sarah Garland and her family.

Following Percy’s admittance to Claybury Asylum in 1900 the 1901c shows that his mother Sarah was living at 2, Park Row Charlton, Greenwich with Maud now 23 years, Joseph aged 19 years and Lily 13 years. We find that Frank had followed his brother Joseph into the District Orphans Working School in St Pancras as seen on the 1901 Census. There are also two boarders in the house.

By the 1911 Census Sarah has moved to 19, Blackheath Park and at the time of the census we find her daughter Maud (Fanny Maud Victoria) and her three children staying with her along with Lily now 23 years and Frank Arthur 22 years.

Maud had married in Jan 1902 to George William Dunsdon (1866-1962) a South African gentleman. She made several trips back and forth to SA and presumably this one coincided with the census. Maud died on 21 Aug 1960 in Wynberg, Cape Province, SA.

Sarah continued to live at this address and can be found on the electoral roll up until 1932.  She died in Sept 1934 and was buried in Greenwich.

Unfortunately most of the addresses found appear to fall right on the border of the area covered by Booths Maps so I have not been able to check on the area or standard of housing the family lived in, but looking at images of the time the area seems to have been quiet with well build homes that suggest a good standard of living. Today houses in Blackheath Park and Park Row can be found online for over 1.25 million pounds.

Sadly there is very little conclusive evidence regarding Percy’s family.

William is present at the marriage of his sister Maud in 1902 as is Joseph who is standing as father and shown as a greengrocer but this is the last proven fact for them both.

Similarly Lily is difficult to trace with any certainty.

Only Frank Arthur born 1 Jan 1889, is to be found.  In the 1939 Register we have a Frank Arthur Garland, Single, General Labourer living at 19, Blackheath Park, Sarah’s old address. It is not until 3rd Q 1943 that he marries, to Daisy Gandy née Thompson.

His death in Sept 1969 was registered in Dover.