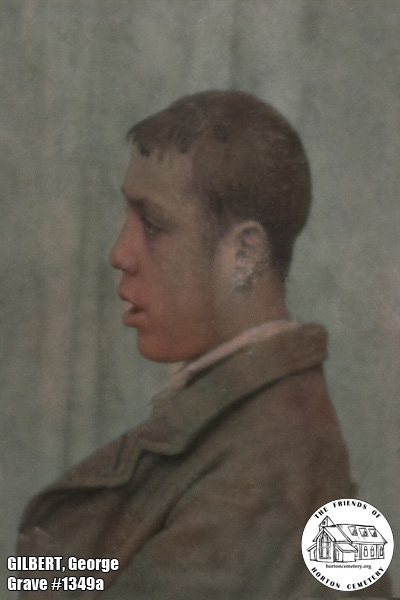 George’s parents were George and Annie Gilbert née Coleman. George snr was born in the SQ 1858 in Newington, London and Annie in 1861 in St Pancras, Middlesex. They married on 25th December 1881 at St John’s Church, Walworth.

Many less well off couples married on Christmas day as the fees were less and in some cases could be waived if the Vicar was feeling generous.

A death – and remarriage

George’s mother Annie died in August 1892 in Peckham and was buried on 17th August 1892 in Southwark leaving George Snr to bring up three young children.

George Frederick was admitted to Harper Street School on 16 Jan 1893 aged four years but in 1895, when his father remarried, he left, “gone to Peckham”.

In the 1901 Census the family is living at 54 Clifton Crescent, Peckham and George Snr is described as “handyman in brewery”.

We don’t know when young George’s problems started to show themselves but on the 22nd of May 1903 when he was 14years old he was admitted to the Lambeth Workhouse Infirmary where he remained until the 25th of June 1903 when he was discharged at his own request.  In the workhouse record his father George is living at 55, Harleyford Road, Vauxhall but there is a note to say that his step mother is living at Clifton Crescent, Peckham.  Have George’s problems caused the family to separate or is George Snr living in Vauxhall to be near his son?  George Frederick returns to his father but is readmitted to the Infirmary on the 9th of October 1903. No discharge has yet been found.  When he is 15 years old he is again admitted on the 22nd of August 1904 and this time he is discharged to Colney Hatch Lunatic Asylum, then in Middlesex, on the 29th of October 1904.

Colney Hatch was opened in 1851, the largest and most modern asylum in Europe and also the most expensive ever built. Numbers grew and by 1857 it housed 2,000 inmates, but by 1858 serious defects in construction began to appear. Expansion continued and in 1899 the control passed from the Middlesex Justices of the Peace to the newly formed LCC.  In 1903, the year before George was sent there a fire occurred in a temporary building killing fifty-one people, the worst disaster in English asylum history.

George left Colney Hatch on the 12th of September 1906 when he was sent to ‘The Colony’, Epsom.

The Colony in Epsom

The Colony had been opened in 1903 to care for the “Epileptic insane of the metropolis”.  In 1907 it housed approx 400 patients who lived in a collection of villas, avoiding the stigma of living in a mental asylum.  The treatment consisted of a specially regulated diet and doses of Potassium bromide, the first effective treatment for controlling epilepsy.  The patients were expected to contribute to their costs by working on the farm or in the kitchens or laundry, all of which supported the Epsom cluster hospitals.  We know nothing more of George’s time there until his death on the 7th of February 1912; he was buried in Horton Cemetery on the 12th of February 1912 in grave 1349a.

George’s family after his death

Sadly George’s father died in MQ 1906 in Lambeth and we cannot know if he was ever able to rejoin his family.

According to Booth’s map of London the roads where the family lived in Peckham were “fairly comfortable, good ordinary earnings inhabited by artisans and mechanics” although most houses would be shared between two families.

We know that Grace Edith and Elsie Ada Alice both went to Australia where they married and spent the rest of their lives.  Frederick Bristow Redfern married but died at Blandford Army camp on the 11th of October 1918. He is buried in Nunhead cemetery, Southwark.  The record shows he died of Pneumonia though it is possible he fell prey to the so-called “Spanish Flu” epidemic.

Alice Susan Gilbert died in 1934 in Wandsworth, 28 years a widow.