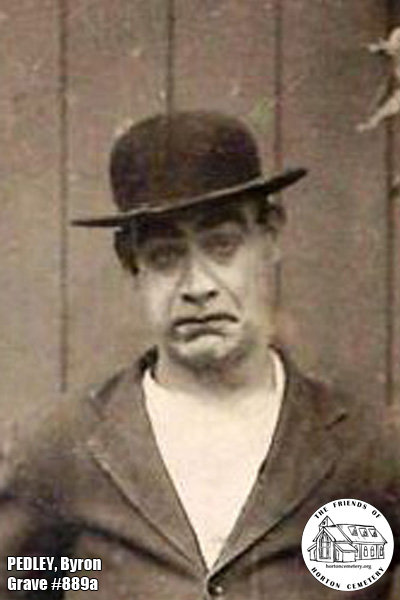 The boisterous, Victorian star of the stage

Byron had a very successful comedy acting career. He clearly enjoyed causing laughter as a low comedy actor, a dramatic form of popular entertainment without any primary purpose other than to create laughter through boasting, boisterous jokes, drunkenness, scolding, fighting, buffoonery and other riotous activity. Byron played many roles both as part of prestigious theatre companies and with many travelling companies across the UK, working with some very well-known 19th century theatre names.

Throughout his theatre life, Byron is often associated with Mr. Horace Wheatley (of Wheatley & Traynor), I like to think they were more than colleagues as they seem to work together often.

The 1861 Census shows a 16-year-old Byron living at home at 27 Maskell Street, Chorlton with his father John, a hot water apparatus maker. His mother Mary and sisters Isabella and Mary-Ann are also listed. Byron’s occupation is listed as a Millwright (someone who installs, dismantles, maintains, repairs, reassembles, and moves machinery in factories), so it would seem that his father expected Byron to become an engineer.

We first know that Byron entered into acting in August 1870, when as part of the Prince’s Theatre (Little Em’ly) company in Birch, Manchester, he and his company played Oxford Cricket Club in a match known as the O.C.C. versus ‘The Fourteen Theatricals’.

In what seems to have been a most enjoyable and non-serious match, we see that Byron failed to score. The match was thus early decided in favour of the O.C.C. The local newspaper reported that, “a midnight reunion, after Little Em’ly had retired for the night, terminated a most enjoyable day.“

On 18 October 1871, aged 27, Byron married Mary-Ann Barber. He was living at his sister Isabella’s house at 14 Alma Street, Manchester, Lancs. On the 1871 Census he lists himself as an Actor at this address, however on his marriage certificate he is listed as an Engineer. The marriage was witnessed by William Nall (Isabella’s husband/Byron’s Brother-in-Law) and also Byron’s youngest sister, Mary Jane Pedley.

In 1872 Byron is listed as playing Sir Thomas Erpingham, in Shakespeare’s Henry V, the annual Shakespearean production held at The Princes Theatre, alongside infamous actor Charles Calvert who played King Henry and also directed the production.

Byron’s sister Isabella died in Q2 1874, and Byron’s next child, a girl born in Q1 1875 was named after his late sister, Isabella. He must have thought a great deal of his sister. Byron then suffered another tragedy when his wife Mary Ann passed away aged 35 in 1877, when he was just 32.

Byron (35), now a widower, remarried in 1879, to Elizabeth Groves (28). This time witnessed by his Brother-in-law Frederick Millo (married to his youngest sister Mary Jane) and Elizabeth’s sister Mary Ann.

Elizabeth came from a theatrical family, her father Charles a Comedian (deceased) and mother Martha an Actress. Elizabeth’s sister Martha also married a Comedian. Her mother as a widow, was now running a lodging house whose tenants were mostly actors and comedians.

We begin to see Byron appearing more in newspaper articles, particularly in Panto. In Christmas of 1877, Byron was part of ‘The BEST COMPANY and STRONGEST COMIC TEAM ever introduced on the Manchester stage’, performing in “The Sleeping Beauty or, Harlequin Scandal and the Wicked Fairy”.

After advertising his availability in March 1878, Byron joined with comedian John Lawrence Toole, a hugely famous comedy actor of the 19th Century, performing in ‘Uncle Dick’s Darling’, ‘Sweethearts and Wives’ and ‘A Fool and his Money’. Byron spent 8 months with the company until Panto season started.

Byron spent 1879 with J.H. Ryley and Sam Austin’s company, performing a series of plays such as ‘Pickles’ (as Mr Lionel Lombard), ‘Under Proof but above Pa’ (as Duc d’Aubeterre).

Continuing his athletic skills, the Manchester Theatre Royal took on the Liverpool Prince of Wales Theatre in a game of Football on 22nd Feb. 1878.

Byron was obviously a favoured and well-liked member of the company, taking on his boss Samuel Austin in a Theatrical Walking Match on 20th July (a very popular spectator sport in 1879).

THEATRICAL WALKING MATCH – The match between Mr. Samuel H.S. Austin, Manager of the Pickles and Under Proof company, and Mr. Byron Pedley, also a member of that company, came off at the Aston Lower Grounds, near Birmingham, on Friday 20th ult. The affair was merely a friendly one, and the competitor who could walk the longest distance in one hour was to be declared the victor. Both competitors were on the scratch at twelve o’clock, and went away at a good pace, keeping exactly together until eleven laps had been covered. At the twelfth, however, Austin spurted, and gradually pumped his opponent out, so that he retired at the completion of the twelfth lap. Austin then went away at a good regular pace, and covered twenty laps in the hour, or 511 yards less than six miles.

On 10th June 1886, Byron and Elizabeth had all three children baptised at the same time, Byron, Dora Martha and Matilda Margaret. This record also helps confirm their date of births, they are still residing at 10 Ellis Street, and Byron is still proudly a ‘Comedian’.

In 1889 Byron had his final child, a daughter named Lillian or ‘Lillie’ for short.

There were many roles played by Byron in the 1880s, but some of his longer standing roles were;

Mr. Muldoon would go on to be one of Byron’s most popular roles ever.

In July 1890 Byron joined ‘E. Lewis West’s No.1 All Star Company’ for a remake of Muldoon’s Picnic, named Muldoon’s Picnic ‘up to date’. Taking up his well trodden character of Mr. Muldoon. This was a highly advertised show and Byron was often stealing the headlines. They must have fallen out as Mr. West took out several adverts in October threatening to obtain INJUNCTIONS against anyone employing Byron. You can imagine Mr West shouting “You’ll never work again” to the infamous Byron. Byron unfazed, joined Mr. Hubert O’Grady’s company for a starring role in a small play called “The Fenian”. It wasn’t long before Byron hooked up with his old friend Horace Wheatley again, performing the pantomime “Ali Baba and his Forty Thieves” in December. After spending some time Disengaged (other than a few small roles) at his family home of 10 Ellis Street, Manchester, Byron briefly restored his role as Mr. Muldoon re-joining a production put on by Wheatley’s company again until the panto season started at the end of 1891.

For some reason we may never know, maybe an attempted change of career, in Jun 1897, a 52yr old Byron boarded the RMS Moor (RMS = Royal Mail Ship) bound for South Africa, returning 6 months later on RMS Don from the West Indies. On his return he took up a new role, with Robert Arthur’s Company playing Professor Ginnifer in “The Trumpet Call” by Robert Buchanan. This play was made into a movie in 1915.

We can’t be sure but it would appear something happened to Byron’s family life at the end of the 1890s. He doesn’t appear to use his home address for correspondence anymore. Maybe it was because of his very busy acting schedule. Maybe that’s why he joined the RMS?

He may not have known it, but Byron Pedley was about to begin his longest acting role yet, joining forces with G.M Polini and Austen Melford’s company, as the detective, Samuel Baxter, in the extremely well received play ‘The Silver King’ a play in five parts, which he performed in some of the most prestigious theatres and opera houses up and down the United Kingdom for almost SIX years until the end of 1907. Appearing in the newspapers on an almost weekly basis his performance never faltered and was always of an extremely high standard.

In 1908 Byron returned, for just 3 months, to one of his most well know roles as Mr. Dennis Muldoon in Muldoon’s Picnic, again with Mr. Horace Wheatley’s Company. He then spent April to July looking for his next role from his abode in Brixton.

From April 1908, Byron was again advertising his services whilst living at 57a Morat Street in Brixton. This dry spell lasted until Sept. 1908 where we find Byron’s last known acting role. Spending 6 months with Mr. W.W. Kelly’s Company performing as Mr. Dill in the popular play “The New East Lynne“. Known performances were at Norwich, London, Belfast, Glasgow, Bury, Greenock and Scarborough, and Byron continued to give his best receiving feedback such as “Mr. Byron Pedley, as Mr. Dill, is responsible for a great deal of merriment.”

In the latter half of 1909, at the grand old age of 64, Byron continued to search for work whilst still residing at 57A Morat Street in Brixton, SW London. Unfortunately, it looks like this was the end of his career.

The circumstances of Byron’s admittance to the Long Grove asylum were down to Confusional Insanity/Delerium. He had spent some time in Lambeth Infirmary due to heart disease and on 14th June 1910, Byron Pedley was checked into the Long Grove asylum, Horton Lane, Epsom. He lasted only three weeks, with his death recorded on 4th July 1910. I can imagine that as such a successful, flamboyant and outgoing comedian, he would have felt trapped when his health finally failed him.

He was an actor, aged 65 and that this is his first attack of mental illness. There were 10 days between first onset and admission.
No principal factor caused his illness but contributory factors were Valvular Disease of the Heart and Senility. His bodily health was impaired. The form of his mental disorder was ‘Confusional Insanity’.

Shows that he went down with Bronchitis on 27 June and then died on 4 July at 8.45pm.

On 6th July 1911, on the anniversary of Byron’s death, an obituary was listed in “The Stage” newspaper in which we see that his children were still thinking of him. This article also confirmed his children from his second marriage, albeit using ‘preferred’ names. I believe Bell to be his daughter Isabelle from his first marriage, Bert I assume to be Byron Jr., Dora is Dora, Tillie is Matilda, and Lillie is Lilian.

PEDLEY – In sad remembrance of Byron Pedley, who passed away at Epsom July 4, 1819. Wife and family – Bell, Bert, Dora, Tillie, and Lillie.

With the exception of Matilda, Byron’s 2nd Family remain buried together in Manchester Southern Cemetery; Click for Record

Matilda, along with husband Sidney (RAMC) and daughter Dorothy all disappear from the records after 1920. On 7 Sept 1920, Sidney had agreed to serve overseas, so I suspect they moved abroad.