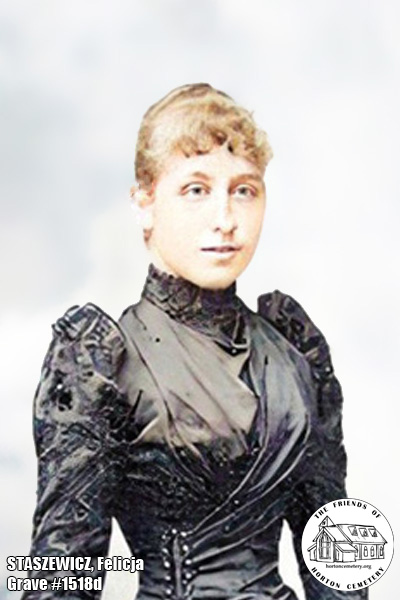 How the Russian Revolution destroyed a family of Polish nobility

This story has been built from a combination of online resources, family notes and historical paperwork. It tells the story of Polish nobility ‘szlachta’ losing everything during WW2 and how this once wealthy woman became buried in an unmarked grave on a now abandoned plot of land in Surrey.

The szlachta were the noble estate of the realm in the Kingdom of Poland, the Grand Duchy of Lithuania, and the Polish–Lithuanian Commonwealth who, as a class, had the dominating position in the state, exercising extensive political rights and power.

Felicja Staszewicz, daughter of Aleksander Skirmunt and Teofila Skirmunt (née Lubańska) was born c1873 – the seventh of nine children – at the family country estate of Porzecza, Piński (now Belarus), the family having retained its Polish heritage despite the partition of Poland in 1795.

c1890 she married Piotr Staszewicz and set up home at his country estate of Mokra Dąbrowa, Pinsk. Felicja and Piotr had ten children but three (Teofila, Maria and Witold) sadly died very young – two of Scarlet Fever and one from Dysentery.

*Whilst the photo shown is labelled “Felicja with her daughter Teofilia”, it has a date stamp of 1908/9 and from family records Teofilia is believed to have died in 1906. This may be dated wrong or could be a photo of Felicja with daughter Marta b.~1900.

It is unclear where Felicja and Piotr moved to after WW1, but Piotr died in 1929, and by 1939 we find Felicja living in Teklinopol (her country estate near Vilnius which she had inherited from her mother) with her youngest daughter, Matylda, who had moved there in 1923 after her marriage to Jan Myślinski (also from a notable family that traces back to 1670).

On the 17th September 1939 the Russian army crossed the border and Felicja and Matylda, together with her two young daughters, Janina and Jolanta, were forced out of their home and moved to the nearby village of Wilejka.

On the 13th April 1940, in the middle of the night, the family were arrested and, together with thousands of others, taken by cattle train into Russia as slave labour. Two of Felicja’s sons, Aleksander and Jan Leon were taken by the Russians and were amongst the mass murder of thousands massacred in the forests of Katyń.

In 1941, when Nazi forces had turned their sights to the East, the Stalin-Sikorski agreement, allowed Poles in Siberia to form a Polish army under the command of General Anders, to join the Allied Forces. This enabled Jan Myślinski to obtain the release of his wife and two daughters, as well as his mother-in-law, Felicja.

On the 13th May 1942, the group travelled to Wrewskaya, near Tashkent in Uzbekistan, to join Jan, and in Aug 1942 they left for Persia and remained near Teheran until 1944 when they were brought to Jerusalem. During this time Felicja was reunited with her eldest daughter, Stefania, and in 1947, unable to return to Poland, they boarded the RMS Samaria (being used as a troop ship for the Royal Navy) and arrived in Liverpool on the 11th Dec 1947.

From Liverpool the family were relocated to the Polish Military Families Camp in Rednal near Oswestry, Shropshire.

Unfortunately, it was here that Felicja’s health declined – there may have been the onset of Dementia – and she was moved to Hospital No. 4 Iscoyd Park, Shropshire, which at the time after the war had become a camp and hospital for Polish refugees.

One and a half years after arriving in the UK her daughter, Matylda, moved and began a new life in London. Felicja’s other daughter Stefania made the decision to travel on to the USA.

Felicja was moved to Horton Hospital in Epsom, Surrey where she died on the 11th May 1950 from Myocardial Degeneration and Arteriosclerosis. Her hospital records are yet to be accessed.

Descendants of Felicja now thrive across the world.

Felicja’s son, Alfred Staszewicz read law and history at the Sorbonne and then moved to Vienna where he died on 20 October 1973.