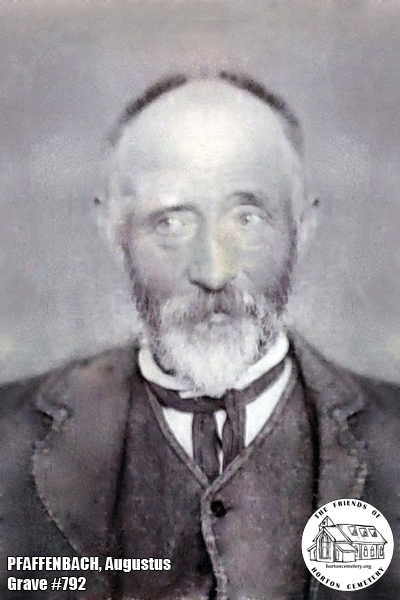 The German Tailor who came to London

This is the story of Augustus ‘Justus’ Pfaffenbach, a German Tailor who came to London, married, had children but then suffered with his mental health.

We first find Augustus on the 1871 census, taken on the 2nd April, where he is residing as a 28 year old lodger at 31 Sim Street. The census states he is a tailor born in Cassel, Germany and there is another lodger, W Joseph a hatter, also born in Germany. It is unclear whether W Joseph is a forename and he is also a Pfaffenbach, or whether Joseph is the surname. There is also a lady, Miss Amelia Clarke, a visitor born in Aylesford, Kent, who is aged 26.

The reason for mentioning Amelia above, is because on the 11 September 1871, Augustus married Amelia Ellen Clarke at St. Lukes, Norwood in the parish of Lambeth. The marriage banns confirm that Augustus ‘Justus’ is still a tailor, and that his father is called William. The wedding is witnessed by Eleanor Ann Clarke, who we assume to be a relative of Amelia.

The rest of the 1870s prove to be a busy time for Augustus and Amelia, producing 4 children;

17th October 1881 the Salter’s Hill school record for Lilly shows the family living at 7 Alfred Terrace, and that Lilly had previously attended St. Mary’s Convent. Lilly left school on 12 Sept 1884, the leaving notes state her father had died and her mother had remarried. This is untrue, but maybe told to avoid embarrassment of the truth that he was in the asylum.

27th October 1883 the Salter’s Hill school record for Louisa shows the family at living at 18 Ashburnham Terrace and that this was her first school. There are no notes on when she left.

On the 28th January 1884 the same record mentioned for Louisa, shows that Augustus enrolled at Salter’s Hill. Again, with no notes of leaving.

From 16 February to 19 September 1884, Augustus spent his life admitted to the Woking asylum, suffering “mania with no known cause”. It is unclear what happened to Augustus between September and December, but on 5th December he was transferred to Colney Hatch asylum where he was to spend almost 5 years.

On 16 December 1884 Amelia and her four lawful children were given a poor law settlement order, recognising that Augustus, although he had moved to several different addresses, had lived in the parish of Lambeth for over 3 years and so the family was able to be settled in the Lambeth poor house, covered by Lambeth parish.

Augustus was discharged (Rel’d) on 15th August 1899 from Colney Hatch, and was admitted the same day to the Manor asylum as Male patient case #2, aged 57.

The records state that his first attack was at age 40, and his present attack had lasted 2 months. The cause is still ‘unknown’. His previous address is given as 25 Granville Buildings, in the parish of St. Luke, and lists the person to inform of his death as his wife, A. Pfaffenach, 14 Park Grove, West Ham. Now a modern apartment block.

Facts indicating insanity: He is restless. He has delusions that some persons are persecuting him, that his wife is in the company with those persons, that wherever he goes they follow him.

Facts communicated by others: Charles Judd states that he says that he hears voices now of persons who desire to injure him & who instigate him to commit improper acts. His wife states that they have moved to different places in London to get rid of those voices & persons that he complains of without avail.

Dull and weak minded. Hears & answers voices, but says he no longer pays any attention to them. His memory is very bad & he has little idea of time or place. Cannot say what year it is & has no idea how long he was at his last asylum.

The case notes go on to say that he was generally quiet and well behaved, working well in the Manor gardens, but often would hold conversations with the voices and aural hallucinations. On the 3rd March 1902 he is discharged from the Manor hospital ‘not improved’ to another of the Epsom cluster of hospitals, Horton Asylum, where he was to spend his final days.

Augustus Pfaffenbach remained at Horton for 1,438 days until he died on 08 February 1906. He was buried 6 days later on in burial plot numbered 792.

What of the family?

Young Augustus died aged 5, in the first quarter of 1886.

By 1891 Amelia and her children had escaped the poor law life, and were living by own means in West Ham. Lilly, Amelia, Louisa now have a new sister Ellen Elizabeth Dorcas, aged 5. Newly arrived daughter Ellen could not possibly have been Augustus’s child. City directories of 1900 show Amelia as a dressmaker at 14 Park Grove, West Ham.

In the 1901 census Augustus’ family, wife Amelia 56, and daughters Lilly 28, Louisa 22 and Ellen 15, are living as servants with a Mr. George W. Dornemann, a 45 year old German baker and confectioner, at 44 Kew Road. Amelia was a house keeper with her 3 daughters as assistants.

Lilly appears to remain single throughout her life. Lilly lives and works with her younger sister Louisa’s family. When Louisa’s daughters are older, Lilly appears to then live with her nieces. She died, unmarried in 1957 aged 84.

Ellen Elizabeth Dorcas Pfaffenbach seem to disappear after 1911, where she is listed as a shop assistant to a baker. There are some indications she may have changed her surname but this is unexplored. Maybe she took the name of her true father if this information was known.