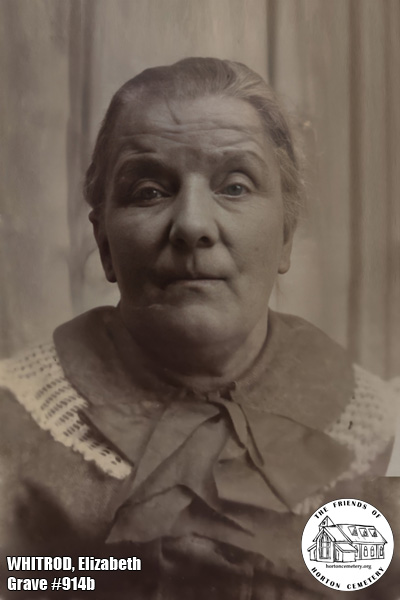 Coping with 6 family deaths within 4 months

Elizabeth was born in the March quarter of 1857 to William and Mary Vaughan (née Bratton/Brattan), in Wrotham, Kent. (Malling registration district).

William and Mary had married on 24th February 1846, at the Parish Church of St Marylebone. William’s father was John, a Gardener and Mary’s father was George, a labourer. On their marriage certificate William was recorded as a servant.

By the 1861 Census, the family was living in Wrotham. William was a groom. Mary, his wife, was entered as a groom’s wife. They had seven children, Elizabeth being the fifth child of the seven and is listed as a scholar. Her eldest brother Edgar is 14 years old and working as a gardener.

Tragedy for the family

By the time of the 1871 Census, Mary Ann, Elizabeth’s mother had died (in February in 1870). A search on the GRO reveals the following sad story.

Elizabeth’s brother Edward had died on 31st of January from a malignant sore throat of 6 days duration.

Next, her mother Mary died on 5th of February from typhus fever.

Then, the youngest brother to Elizabeth, Ernest, died on the 20th March, aged 14 months from thrush and diarrhoea.

It is hard to contemplate the family coping with such losses within the space of three months and one wonders what effect those deaths had on the remaining family.

The census of 1871 shows Elizabeth is acting as housekeeper for her father and her younger siblings Bertha, Clara and Frank, who were still at school.

William, her father died in 1872 and on the 1881 census, Elizabeth is 27 years old, working as a housemaid to Hancilia E. Ionides, an Annuitant.

On the 1891 Census, there is an Elizabeth Vaughan with a given age of 30, living as a housemaid / domestic servant. The head of the household is absent. The address is 2, High Street, West Malling. With her, is a Kate Vaughan some five years her junior and born in Malling, whilst Elizabeth is recorded as being born in Stratford upon Avon. I wonder if that was the birthplace of the absent head of house. Perhaps Kate is what Clara, born in 1860, was known as.

In 1893, Elizabeth marries William John Whitrod, a 32-year-old labourer. His father, Roper, was a boot maker but was deceased by the time of the marriage.

William John Whitrod was born in 1861, in the Guiltcross registration district of Norfolk, the fourth of nine children. His parents, according to a family tree on Ancestry, were said to be married in 1852, but I can find no proof of this. The children were all born between 1855 and 1873.

On the 1901 Census, William and Elizabeth are living at 7 Lansdowne Crescent, Kensington. William’s occupation is that of a scavenger and Elizabeth is a caretaker. A scavenger would be what today we call a dustman, a refuse collector or street cleaner. There is no indication of Elizabeth’s epilepsy.

Epilepsy for many years

Elizabeth was first admitted to Horton on 10th July 1906, and she stayed there for five years. On October 23rd, 1911, she moved to the Epsom Colony. She was there for a further seven years or more and died on 12th January 1918. Elizabeth’s death certificate shows that she suffered from epilepsy for many years. She is not described as a widow.

I cannot locate her husband, William. A search in the GRO index shows the death of a William John Whitrod, aged 45, in the March quarter of 1907 in the Chelsea registration district. Could this be him?

It is hoped that Elizabeth’s medical notes will have survived, and more information will become available.