Not much is known about Mary Ann’s early life, we assume she was born in about 1848, based on the information provided on her death record, case notes from The Manor Hospital and the two likely census records for her.

The case notes also state that she was married to a Richard Colson, but no further details about when or where they got married or if she had children was recorded or has been found.

Therefore, it is difficult to find out what her maiden name was, who her parents were or exactly where she was born. Although, if the census records are correct, she was born in Lambeth, Surrey.

The case notes written up at the time of her admission to the Manor Hospital in 1899 do provide us with a photograph and a description of her aged about 50 years old.

Her general bodily condition was described as good, as was her nourishment which suggests she was physically in reasonable health. There was a bruise on her right cheek.

Her hair was grey and of fine texture, her complexion was pale and she did not have many marked farrows or lines. Her eyes were brown and her teeth were bad.

I have found two census records for Mary Ann and Richard Colson that I believe are correct.

The first was taken on evening of 3 April 1881 when I believe the couple were living at 3 Archer Street, in the Vauxhall area. The family name was recorded as Coulson, rather than Colson, this could be a spelling error or it could be the correct spelling of the surname.

Richard was 31 years old, born in Bow, Middlesex and working as a bricklayer’s labourer.

His wife, Mary A. was 33 years old and born in Lambeth Surrey. She was working as a needlewoman.

The 1891 Census, taken on the evening of 5 April, spelt the surname as we recognise it from the later records, as Colson. The couple were found living at Dunstan’s Road, in Camberwell, Richard was 41 years old, born in Poplar, Lambeth and a labourer. His wife Mary A. was 42 years old, born in Lambeth, Surrey. At this time she was not working.

The case notes from The Manor Hospital suggest that Mary Ann suffered her ‘first attack’ when she was aged 46 years old, in about 1894, and it lasted for about 4 months, the supposed cause was unknown, although it was not thought to be connected to epilepsy.

It also confirms her occupation as as being a Charwoman and that her religion was Church of England.

This ties in with an Admission record for a Mary Ann Colson to Peckham House, Camberwell Workhouse on the 6 October 1894. She was admitted as a pauper.

She remained there for over 4 years until she was transferred to The Manor Asylum, Epsom on 23 June 1899. No case notes or information about her time at Camberwell have been found.

The case notes and admission records from the Manor Hospital mention that her husband Richard Colson was also ‘afflicted with insanity’ and that he too was at Peckham House, Camberwell Workhouse.

A discharge record has been found for Richard Colson being discharged from Havil Street Workhouse to Peckham house on the 13 January 1993. It appears he was discharged from Peckham on 14 April 1896, after Mary Ann had gone to The Manor, but not clear where he went then.

Sadly, we do not know how or why both Mary Ann and her husband ended up in the Workhouse, was it a family tragedy that affected them both, or illness or destitution?

On arrival at The Manor Hospital on the 23 June 1899, Mary Ann’s mental state was recorded as “grossly demented, cannot answer any question but persists in gabbling lot of incoherent nonsense; is foolish in manner.”

The Statement of Particulars state that Mary Ann was a danger to others as she “has struck other patients”, but she was not thought to be suicidal.

Once settled at The Manor Hospital ‘Progress of Case’ notes were made at regular intervals, generally about 4 times a year, until December 1907 the month of her death, when 4 entries were made.

The mention of dementia is common throughout the entries. She also often appeared to be “incoherent and abusive”.

In July 1904, over 3 and a half years before she died the entry described her as ‘dull and vacant, no memory, takes no interest in anything?’. I think things slowly went down hill from then in, almost every entry from then on includes the words: “demented”, “incoherent”, and/or “abusive”.

During the last few weeks of her life she was hardly eating and became bedridden, it must have been a release for her and those looking after her when she passed away on the evening of 18th December 1907 aged 59 years.

Case notes for Mary Ann Colson from the Manor Hospital include a copy of the Statement of Death sent to the coroner. This provides us with the cause of death, which was atrophy of brain which she had suffered from for many years and chronic Bright’s disease, which she had had indefinitely. 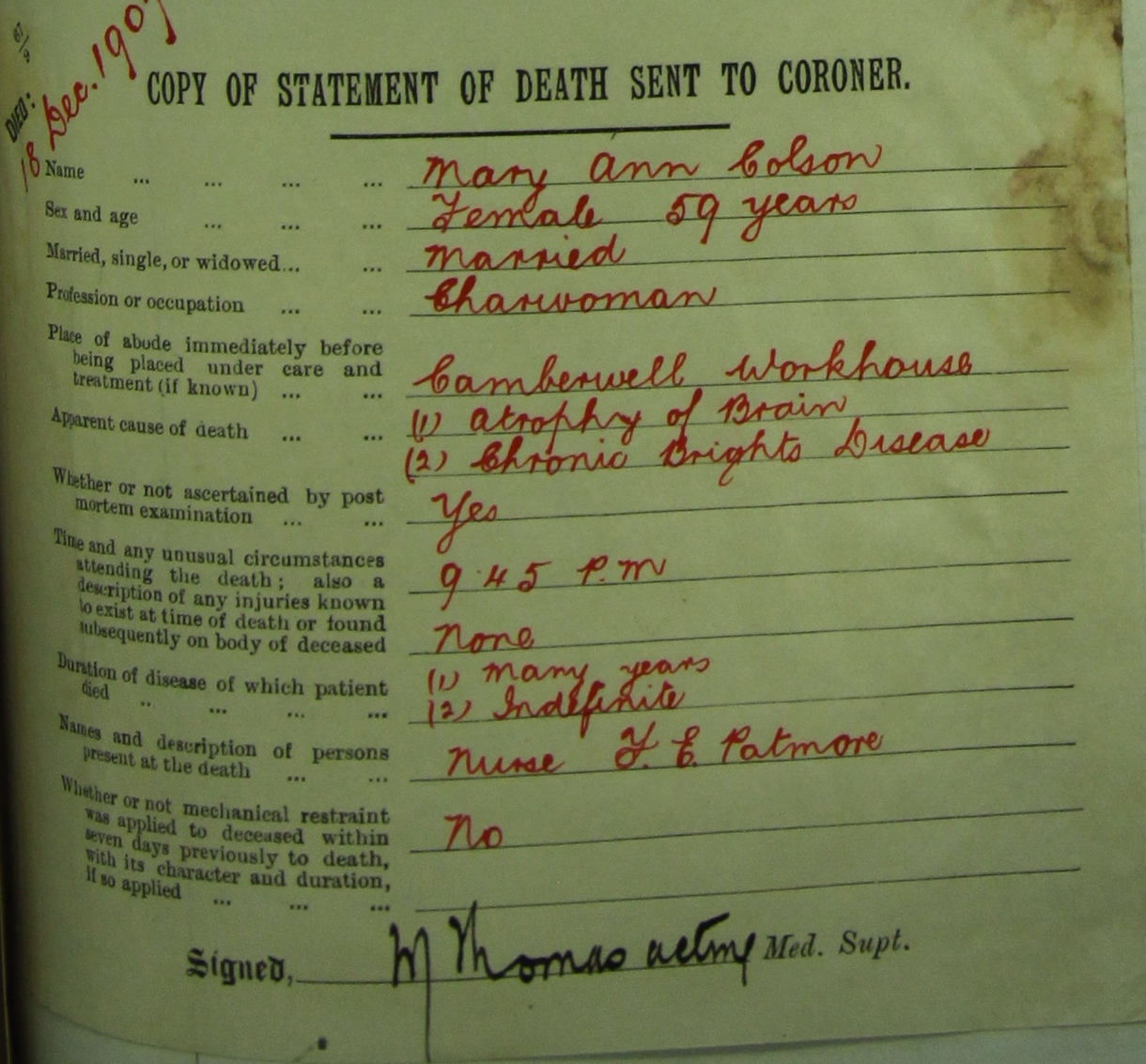 Case notes for Mary Ann Colson from the Manor Hospital have helped hugely in building up a picture of Mary Ann’s final years life. Sadly very little is know about her earlier life, what caused her poor mental health, or what happened to her husband Richard.

At the time Mary Ann Colson was ill, dementia was commonly found on admission records of mental or lunatic asylums. This diagnosis was not associated with age as it is commonly today, but used to mean cognitively impaired or mad. Similarly to other common diagnoses of the time such as mania, melancholia and hysteria patients were often sent to asylums to keep them away from the rest of society.

In some asylums, patients were reasonably well treated and the diet was better than they might have got outside of the asylum. In some instances they would have been able to help in the gardens, exercise or do crafts. However, I imagine this would not have been the case for Mary Ann as even on admission to the asylum she was described as a danger to others.

This might have led to her having to wear physical restraints such as straitjackets, chains and manacles which were used at that time to restrain patients. Other credible treatments at that time for dementia patients were bloodletting, purging and ice baths. These archaic treatments continued into the 1950s.

The case notes for Mary Ann do not give details about any treatments she received but suggest that for most of the time she was in The Manor Asylum she had lost interest in life generally, even on entry to the Asylum on 23 September 1899 she “takes no interest in her surroundings”.

Most of my research was carried out on ancestry.co.uk, where I have started a public ‘Colson tree’. There are many unanswered questions which may be answered as more documents become available or other relatives/researcher discover the tree.

Last update on March 20, 2022
Author: Sally Nestor
Categories: Manor Asylum
Tags: There are no tags for this post