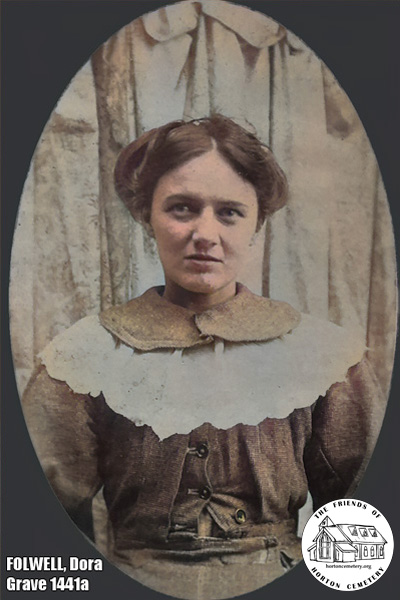 Her parents were Herbert William Folwell (1856 –1930) and Rebecca Looker (1862 – 1930).  Herbert and Rebecca married in Q1-1887 in the Chelsea registration district, London, though no church marriage entry has been found.

Herbert William’s parents, Herbert and Jane Inge, came from Canterbury in Kent where his father was a “Postmaster” before moving to Brixton in  Surrey where Herbert William was born in 1856, one of five children.

School in Carshalton, Surrey so we can assume he received a reasonable education.

In the 1891 Census Dora, aged 3, appears on the census living with her parents at

38, Thorparch Road, Lambeth. They also have two ‘boarders’.  Her father, Herbert is 34 years old and is shown as a “Grocer’s Assistant”. Her mother Rebecca is 29 years and was born in Scotland. She is shown as a “Dressmaker”.  Rebecca was one of eight children born to William Looker and Elizabeth Forrest.

In Booth’s poverty maps the houses in Thorparch Road are shown as “mixed, some comfortable, some poor”.

By the time of the 1901 Census a younger brother had arrived.  Herbert William Jnr was born in Fulham, Surrey on 20th Feb 1892 and according to the census the family is now living at 7, Firth Gardens, Fulham alongside another family of three. Herbert Snr is still working as a “Grocers Assistant”. Booth’s poverty maps shows this relatively new area as a “fairly comfortable/well to do” 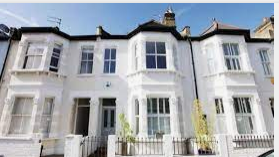 A house in Firth Gardens today.

In 1900 Dora was admitted to the local Munster Road School aged 13. She had already spent 5 years at “All Saints School”. In 1899 the school leaving age had been raised to 12 years and so Dora may not have spent much longer in education.

Admission to the Colony and death

We know from the Lunacy Register that on 20th December 1910 Dora was admitted to the Ewell Epileptic Colony, Epsom. She was just 23 years old.

On the census of the following year, it says that her epilepsy started when she was 16 years old.

The Epsom Cluster comprised five asylums built between 1899 and 1924. ‘The Colony’ opened in 1903 to cater for the “Epileptic insane of the Metropolis” and offered some new treatments recently made available.

Patients contributed to the whole of the cluster by working in some capacity in the laundry or the bakery or kitchen or outside in the garden or on the farm, and we can see from the census that Dora was working as a dressmaker.

Dora’s family after her death

From that same census, 1911, we can see that Dora’s family seem to be in difficult circumstances.  Her father Herbert William Snr is found as an “Inmate” in the Fulham Workhouse, Fulham Palace Road, Hammersmith, but we cannot tell if he is in the Workhouse or the Infirmary.

Rebecca is shown living alone at 63 Waldemar Ave Fulham where she has two rooms.

Their son Herbert William Jnr, aged 19, is an “Inmate” in the Church Army Hostel, 46 Acre Lane, Stockwell. He is said to be “formerly a general labourer”.  I believe these hostels were night shelters where homeless men could get a hot meal and a place to rest but I could find little definite information about the Acre Lane Hostel.

You wonder why young Herbert could not go home to his mother if he was in such dire circumstances.

Whatever caused Herbert Snr to be in the Workhouse he seems to have recovered and continued living in the Fulham area until his death in 1stQ 1930.

The only other references to Rebecca come in 1918/9 & 1923 when she is shown on the Electoral roll living at 59 Waldemar Ave, Fulham, again living alone. I think that the family split up around 1910/11 but we have no clue as to why this happened.

Strangely, like her husband, Rebecca died in the 1stQ 1930. It would be interesting to see their death certificates to learn if they were living together again and when and from what they both died.

It is likely that they were both buried in North Sheen Cemetery which was opened when Fulham Palace Cemetery became full.

Possibly this is where he learnt to drive and work with motor vehicles as later, in the 1939 Register, he is living at 13, Putney Hill and he says he is a Chauffeur/mechanic and in 1949  he seems to be working for the Postal Service as a motor mechanic.  His wife is shown only as F and I cannot find a marriage with this name; possibly she used a preferred name.

Herbert died in December 1956 in Battersea.

It is sad that there is so little to tell about this young lady. She seems to have come from a family where education was valued and they appeared to have lived comfortably.  Dora’s illness at the age of just 16yrs must have put a strain on the family but they seemed to have managed and kept her with them until 1910.

We can only guess what caused the apparent split within the family – it may have been a domino effect of illness, loss of income and family breakdown. Let’s hope that we are able to see her records one day and answer some of these questions.