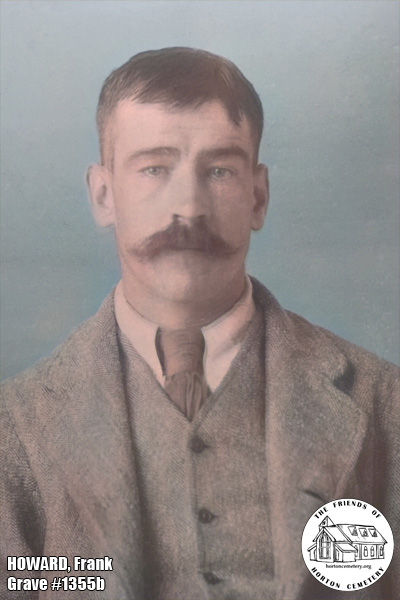 Frank’s appearance in the Lunacy Register and his hospital admission form do not record his DOB but according to the 1881c Frank was born in 1876 in Slough, and we have a civil registration for Sept Q of that year for the district of Eton, Bucks, but no baptism has been found. His admission to the Colony shows an admission date of August 1903 and an age of 28.

This has proved to be a rather complicated family group, but I believe we can be sure that this part of a possibly larger family is correct as in several places they reference living in Campbell Road, Islington. Once in 1887 when Lydia is admitted to the Cottenham Road School, Islington, address 33 Campbell Rd. Then again in 1889 when Frank is admitted to St Mary’s Infirmary Islington by his mother living at 33 Campbell Street and then in the 1891c when Mary, now a widow and Lily (possibly Lydia?) 17rs and Susan 12yrs are at 57,Campbell Road, Mary is a Laundress.

According to Booth’s Maps Campbell Road was in St Anne’s Parish, Upper Holloway and is marked in Black. Although it says the houses were well built, they were unkempt and the area dirty, those that lived there were “of the lowest classes, vicious, semi criminal.” The notebooks state that it was an area full of thieves and prostitutes and women “shouting in loud voices.” If you look at the 1881c you will see that the houses were packed out with vast numbers of people and even into the interwar years Campbell Road was known as ‘Campbell Bunk, the worst Road in North London.”

Following Joseph’s death, the family seems to have had some difficult times.

In 1889 Frank, aged 13yrs, is admitted to St Mary’s infirmary as a pauper, he appears to remain there from Dec 89 – March 1890, brought in by his mother and discharged into her care. Later hospital admission records state that Frank’s Epileptic fits began when he was about 7yrs old although on these same records and on the 1911c it says he first developed Epilepsy at 26yrs.

Between Dec 1890 and Dec 1891 Frank 14yrs and Arthur 15yrs (brother/other relative?) are in the Workhouse twice ‘on remand’ and when discharged ‘taken by police.’

In the 1891c we find a Frank Howard 14yrs is an ‘inmate’ on the Training Ship ‘Torwell’ River Thames off Purfleet, Essex could this be an attempt to give Frank the opportunity of a fresh start in life? Later hospital records show that he became an Able Seaman, Engineer and fitter, in the RN which he left aged 21yrs and went on to join the Merchant Service, so the help he received did seem to make a difference.

I have tried to trace his partner in crime, Albert. Supposedly born in 1875 he does not appear on the ‘81c with the rest of the family. One possibility is an Arthur Howard found age 16yrs in Mac Gregor House, Home for Boys in St Brides, City of London where he is shown as a screen maker.

The rest of Franks siblings are almost impossible to tie down. The names Lydia, Ellen and Susan all appear in various London workhouse/infirmaries in the 1890’s and it is possible that both Ellen and Lydia had illegitimate children, but more work would be required to get to the bottom of this family.

From 1891 when Frank was on the training ship Torwell we have one possible sighting of him in 1898 when we find a Frank Howard, Seaman, aged 20yrs in the Stepney WH with Malarial Fever.

In the 1901c we definitely find our Frank Howard in the National District Hospital, Holborn, 25yrs Engineers Assistant born in Slough, with Epilepsy.

1902 sees Frank in and out of the Liverpool Road, St Mary’s and St John’s Road WH until on 20th February he is discharged to Canes Hill Asylum, Coulsdon, Surrey where he remains until at least 20th August 1903 when the register says he is “not improved” and he is transferred to the Ewell Epileptic Colony, Epsom.

Frank’s move to Epsom is not shown in the Lunacy Register but we know from the 1911c that he was a patient in ‘The Colony’ Epsom.

The Epsom Cluster comprised five asylums built between 1899 and 1924 ‘The Colony’ opened in 1903 to cater for the “Epileptic insane of the Metropolis” and offered some new treatments recently available. Patients contributed to the whole of the cluster by working in some capacity in the laundry or the bakery or kitchen or outside in the garden or on the farm.

We have now been able to see Franks records from ‘The Colony’ but there is almost no personal or family information included. Details show his next of kin as “Mrs Hayman of 40 Myrtle Street, Blackstock Rd, Islington.” There is a marriage recorded in Q4-1894, of Lily Howard (born Gloucestershire) to Frederick Heyman in Islington. The 1901 census shows them living at 40 Myrtle Street, Blackstock Road, with their 3 sons, Frederick, Frank and Thomas.

Frank was about 11yrs old when his father died and following that he was in and out of various workhouses, then away to sea and the record tells that he had “no settled home”. It sounds like Frank was lost to his family from an early age.

On admittance his general condition is said to be fair, but he is having frequent attacks and is unable to do anything for himself. He is diagnosed with “Epileptic insanity with dementia and emotional instability”. It is noted that he is dull, weak minded, easily excited and prone to threaten violence,” He is generally known to be an “unreasonable grumbler”.

Patient has fits (a kind of epileptic seizure) very frequently, he is unable to talk at all & only moans & smiles when spoken to. He tries to injure himself by bashing himself against anything that may be near. Is quite unable to do anything for himself.

During his time in “the Colony” he worked on the farm although his work was only “fair” and he was “still unable to take proper care of himself” although his medication did help to calm him and, in 1906 it is said there has been a great deal of improvement and he is now peaceable and has “made himself a trusted and useful mat maker” although he can still be prone to loss of self control leading to violence.

These types of comments continue throughout the next few years, but it is apparent that his seizures are increasing until in Feb 1912, just before he died, they are noted as ‘322 in the past quarter’. Due to falling with his contestant fits Frank was continually sustaining injuries including one on the back of his scalp that was regularly re-opened by his falls. His quarrelsome manner also led to various injuries, and he had occasionally to be ‘restrained’ or ‘secluded’.

By summer 1911 he was noted variously as ‘unmanageable, confused and falling about’ he was still working but ‘not much use’.

Frank HOWARD was buried at Horton Cemetery on 20th February 1912 in grave 1355b.