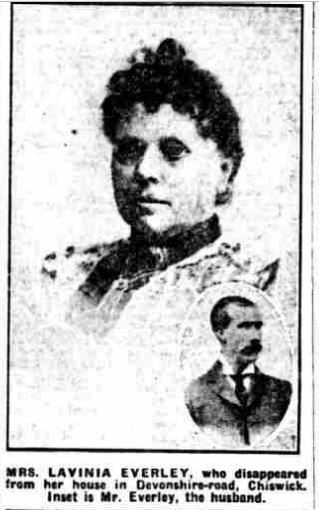 The mysterious case of the Widow and the Decorator – The mystery of a lady who left home and was never seen again. Only years later was she found to have died in Epsom with a different name.

The mysterious story of someone who wasn’t who they seemed. Amelia FRANCIS a.k.a. Mrs. Lavinia EVERLEY nee TEMPLEMAN.

On December 28th 1911, a mysterious widow was arrested for begging on Grays Inn road, giving the name Amelia FRANCIS. After being remanded she was sent to City-road workhouse on January 5th and 12 days later sent to Long Grove Asylum.

In the meantime, the strange case of Lavinia EVERLEY was unfolding. Frank EVERLEY had gone out to attend to business leaving his wife with a servant, Mrs. CORK. Whilst Mrs CORK was distracted, Lavinia escaped the house in slippers with no hat or coat, she was last seen by a member of the public saying she was going to “visit her mother” (who was 40 yrs dead). Even though the alarm was raised within 20 minutes, Lavinia was never seen again; that was December 28, 1911. Scotland Yard and 21,000 police joined the search but found no-one.

According to the news at the time, Mrs. Everley was a well-preserved woman, possessing a good complexion and figure, and looked a great deal younger than her age of seventy-four (Actually 72). She was born in Hinton St. George, in Somerset, and in 1866 aged 27, first married Mr. Bryant William Claridge, a coach painter by whom, in 1869, she had one son, Mr. [Bryant] Henry William Claridge.

Following the death of Mr. Claridge in 1901 when Lavinia was 62, Lavinia lived as a widow until in 1903 marrying Mr. Francis (Frank) EVERLEY, a house decorator living in one of the houses comprising her property. He was very much younger than she, being thirty-six, while she was sixty-four (her marriage cert states 50).

12 months after the disappearance of his wife, Mr. EVERLEY tried to have the estate of houses released. This proved difficult as the judge repeatedly stated that he wanted further evidence of this ‘very peculiar case’.

The judge refused probate, requesting an affidavit of the servant Mrs. CORK. On Dec 16 1912, Mr Justice Bargrave Dean gave leave to presume that she was ‘probably dead’ and although an ‘extraordinary story’ released the estate. She left three houses (value ~£350) and a life policy of £25.

Several attendants at Epsom Asylum read the reports of the probate court case and thought it may refer to one of their inmates. Particulars were sent and communicated to the family via solicitors. Her son visited the asylum, identified her from a photograph which was in the possession of the authorities, and the mystery was finally solved in January 1913.

Side note, Lavinia had been admitted to an Asylum before, for 1 year between Jan-Dec 1873 in Somerset. She was discharged as being ‘Recovered’.

Francis EVERLEY then went on to marry the servant/carer, Mrs. Charlotte R. CORK (also a widow with an unemployed son). They remain together in death and are buried in a shared grave purchased on Charlotte’s death aged 62 in 1936, in Chiswick New Cemetery. Francis died in 1955 aged 88, leaving £126 to his maid Edith Agnes Price.

Lavinia’s son went on the be a very successful chartered accountant.

The mystery of the disappearance from her home in Chiswick on December 28, 1911, of Mrs. Everley, leave to presume whose death was granted by Mr. Justice Bargrave Deane on December 16 last, has been cleared up.

From correspondence which the husband, residing at Duke’s-road, Chiswick, has had with Messrs. Batchelor and Cousins, solicitors, acting for Mrs. Everley’s son by a former marriage, and inquiries he has made, it appears that Mrs. Everley dies in Long Grove Asylum, Epsom, on April 24 last. The day after she was missed she was arrested on a charge of begging in Gray’s Inn-road. She then gave the name of Amelia Francis and described herself as a widow. After being remanded she was sent to the City-road Workhouse on January 5, and 12 days later was transferred to the Long Grove Asylum, where she died from chronic Bright’s disease. Her son, Mr. Claridge, was able to identify a photograph of her which was in the possession of the authorities. At the time of Mrs. Everley’s disappearance a full description of her was circulated.