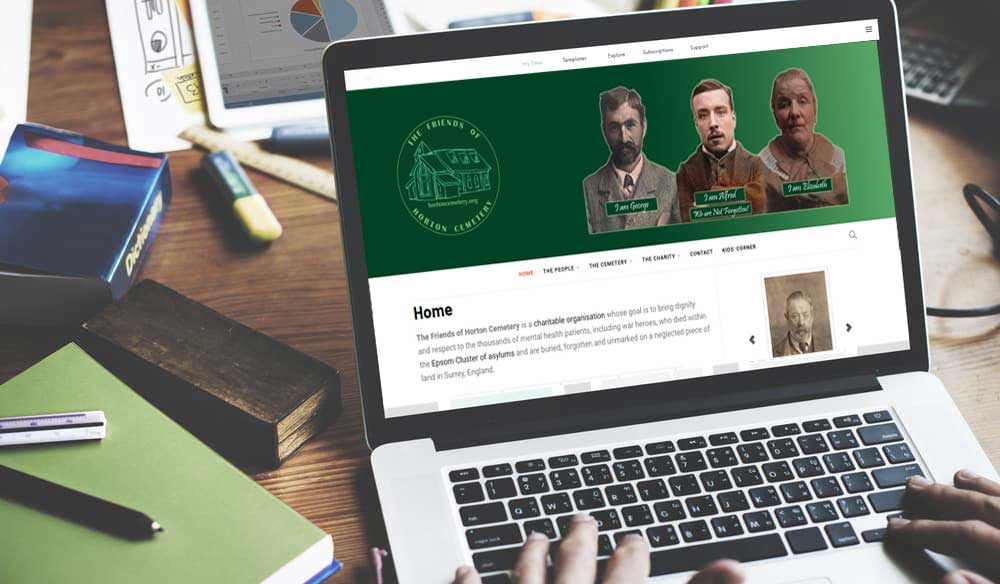 I thought it might be interesting to document the process of building a story. I was allocated the name Harriet KING. As with any married patient, the key is getting a maiden name. This proved difficult in this case due to many incorrectly researched Ancestry trees (I never trust another person’s tree), and multiple family marriages to wade through.

Many people make the mistake of starting by looking at birth records, but we don’t know a maiden name, if this is even her real name, or where she might be from (she might not even be English). There is a lot to do before searching birth records, we need to work backwards.

So, what do I know? The information provided comes from the original transcription of the burial records for Horton Cemetery.

From this brief amount of information we need to gather the FACTS… no guessing at who she might be.

We confirm this is the right person with the following information;

I then accessed the Manor Address Book Female No.1 (6282-13-56) to see if there were any entries for patient reference 315. I find the entry for Harriet KING, Patient ref. 315, marked as “died” at the asylum. I am in luck, as it lists a number of relatives to help with my research;

We can see that her daughter Harriett Ashenden was by far the most frequent visitor. The husband and Sisters are not listed as ever visiting (so were probably just ‘known’ relatives), and some children are also listed.

With this key information I can begin to build a tree of facts.

I now have several lines of enquiry to follow. This information not only provides us vital clues, but also helps us eliminate questionable records and people from the research.

So here is how it went…

A search for Harriet King, using the death date of 1913 brings up approximately 20+ records of interest. We should note that Ancestry does have holes in its records.

Starting at Horton and moving backwards – knowing she came from Banstead;

As you can see, each discharge will match an admission date elsewhere.

We know that on this occasion, Harriet’s original reception order is dated 18th March 1880, and so it would seem that her admission to Banstead was her first. This does not rule out the possibility that Harriet may have been institutionalised under a separate order and discharged as recovered in between this episode and an earlier one. However, the original reception order does state this was Harriet’s first attack, and so for now we can dismiss the 20+ other Harriet King’s in the asylum system.

For example, the next record for Harriet King, admitted to Colney Hatch on 24 Aug 1877, then discharged Rel’d on 21 Sep 1878. This discharge date matches an admission to Bedfordshire 21 Sep 1878, and this Harriet was then Discharged Recovered on 26th July 1880, a date which overlaps our Harriet’s admission to Banstead, and so proving this was a different person.

The only way to acquire the Banstead case notes would be a trip to the LMA. At this time I am unable to make such a trip. Any volunteer?

All Manor/Horton deaths are registered in Epsom Surrey, which makes our search a little easier.

Ancestry: Searching Harriet KING with an exact death of 1913, we get 6 results, none of which are our Harriet.

GRO (General Register Office): Searching for Harriet KING with a death of 1913, we get 13 results. One record is for Harriet King, aged 77 at death, registered in the 3rd quarter (Q3, Jul-Aug,Sep) in EPSOM.

I could place an order for the PDF copy of the certificate which will cost £7. However death certificates offer little in terms of additional information that will add to our story.

FreeBMD: Although we found the right record above, for completeness I searched the FreeBMD database, and found the same 13 records. Some researchers find FreeBMD easier to use, although you cannot order a copy of a certificate on this site.

In many cases finding the marriage when you know both spouses can prove quite easy. However, when dealing with common names it can be difficult to be certain you have the right people.

My breakthrough came by researching the life of daughter Harriett Ashenden; which was a whole rabbit hole of confusion described below. However, after thorough research I got through, proving that daughter Harriett had the middle name of Emmeline. Finding Harriett Emeline King’s birth proved easy, giving me a maiden name of BORAM for her mother – this is the key piece I needed to begin confirmation of Harriet’s earlier life.

Next, I will search for any other KING’s with a mother’s maiden name of BORAM to see if any could match the visitor log of sons and daughters.

So who is the daughter, Mrs. Driscoll? Upon further investigation on the daughters we find;

So it would seem that Mrs. Driscoll, is actually Alice. When the children attended the funeral (marked with a ‘x’) in 1913, the daughters Rosie and Alice were listed as King.

All of the children found via the GRO above have been confirmed through research as being the children of our Harriet and Henry. Along with the birth of William Henry in 1857, they appear to have had 10 children in total, although Caroline died aged 0 and William Henry died aged 5.

With the information above, it was quite easy to find the family census records across the years filling in the gaps and providing the full family. It’s always good to make note of the actual street names, birth locations and occupations when checking census records, as these help to confirm and link through other records.

It would appear that Harriet and Henry chose not to baptise their children. However, now armed with Harriet’s maiden name, I was able to confirm her siblings (of which there were eventually 7) and parentage through census and baptism records.

I can now also search any marriages from Boram to the visitor log names of Ellerman and Woobrough.

With the knowledge the Harriet’s maiden name is BORAM, I found that in 1851 there is a BORAM family living in Lambeth Street, an Isaac S. and Margaret Boram with children Harriet, Amelia, Patty and Arthur.

The unusual name Patty called for a search of marriage to a Woobrough, and lo and behold we find Patty Dalton BORAM to a Mr Henry WOOLNOUGH (not Woobrough) – Mrs. P. WOOLNOUGH is found.

Patty was baptised in 1891 aged 49, where the baptism record also shows she is married to Henry Woolnough. The Baptism record gives her address as 39 Baker’s Row, Whitechapel, matching the visitor log.

I wondered if Amelia maybe the M (Millie?) in Ellerman, but this led nowhere. Additional research turned up an older census showing that there were 3 elder siblings, Isaac, Edwin and Emma. But again, none of this led to an ELLERMAN.

It is with thanks to a relative of Patty, who had done extensive paper based research into her, that a major clue appeared. Patty’s birth certificate revealed unexpected and unusual aspects. Listing a father, John Dalton, who was then struck out by the Registrar. Similarly, the mother’s name was entered as Margaret Dalton but then ‘Dalton’ had been struck out and the name ‘Boram’ entered. This revealed that Patty’s parents were not actually Isaac Samuel and Margaret Ann Boram but instead Patty was the daughter of an elder daughter, Margaret, and a man called John Dalton. There is no doubt that Isaac Samuel and Margaret Ann brought Patty up as her parents, appearing as parents in her adult Baptism and her marriage records. Patty also kept the middle name Dalton for her true father. With Margaret being only 17 at the time, it is likely she was hidden or sent away during the taking of 1841 census. Taken on 6th June 1841, Margaret would have been 8months pregnant.

I had no idea that eldest daughter Margaret existed until this fact arose, and very soon I was able to find a baptism record confirming date of birth and parentage, and then a marriage in 1851 to Jonathan Clark, again confirming the relationship to Margaret’s father Isaac S. the Saddler.

After mother Margaret’s death in 1861, it seems that Isaac Samuel continued to live with Margaret and her husband John. Isaac then died in 1883. I haven’t investigated what happened to husband John, but in 1884 Margaret, a widow, re-married a Henry ELLERMAN (widower) in 1884, witnessed by sister Amelia, solving the riddle of sister, M. Ellerman.

A small breakthrough in that we find a 1921 Probate entry for a William Ashenden of 5 Grenade Street, Limehouse, died 10 Dec 1920, leaving effects to the value of £220 to Harriett King, Widow. I really struggled to find any marriage, which is explained further down.

This is further backed up through the electoral register.

These entries, with the confirmed address, gives us daughter Harriett’s spouse. The 1911 census, shows William(59) and Harriett(56) and they are living with 2 children, Rose(18) and Albert(22), at 5 Grenade Street, Limehouse. William’s place of birth is listed as London, Rotherhithe, and he is listed as a Carman, and employer (of son Albert, also a Carman) working at home. The 1911 census is the first to be completed by the actual person. The record states they have been married for 34 years, giving us a rough date in 1877, and that they had 6 children together all alive.

The census of 1881 gave us a breakthrough, we find Harriett E. Springall “Living as Wife” with William Ashenden. The children at the time are listed with various Springall and Ashenden surnames. After much research I managed to pull apart whose children belonged to who, and discovered a previous marriage between Harriett and James Charles Springall.

So Harriett King, married James Springhall, then lived as wife with William Ashenden, hence no marriage cert, although their children carried the Ashenden name.

But, we do not need to research this family line any further, the story is about Harriett’s mother Harriet.

Harriet was first received into the asylum system in 1880.