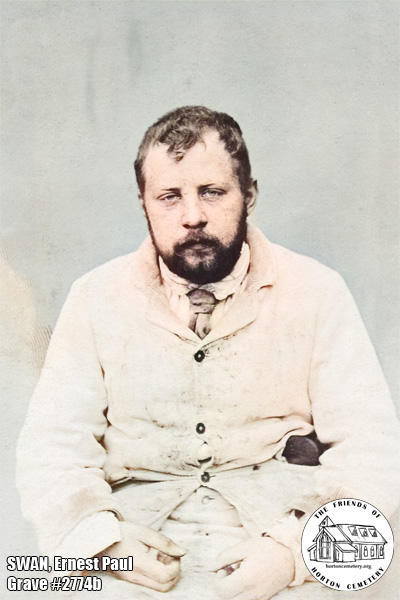 This is a placeholder for a future story to be written. Here are the facts known about Ernest from his file.

Ernest Paul Swan, case #188, was admitted to the Manor hospital asylum on 09 March 1904, aged 25, Single and a Musician. His previous abode was recorded as: St. Giles Workhouse, Endell St, WC., and he was transferred from Hanwell.

The dates listed in the book refer to visitation dates, and we can see he received a regular flow of visitors. This book is a wealth of information on relatives and addresses to help trace the family.

His notes span all available pages, and extend over to another case (c19). He was transferred to Banstead on August 11th 1916, but the notes continue, and the book states; “The above notes are copies of those made whilst Ernest Paul Swan was a patient at Banstead asylum, when the Manor Asylum was functioning as a War Hospital.”

He is very morose & melancholy. Does not talk to any one & is very reticent when spoken to. He has delusions of persecution & more particularly against his father whom he accuses of putting chloroform & other obnoxious things about his clothes & [final sentence redacted out of respect].

Facts indicating Insanity observed by myself at time of Examination, viz:-

His mother Helen Swan, 19 Green St. Leicester Square, states that his manner has been strange for about 12 months that he has become untidy in his manner & subject to violent outbursts of temper, that he has the delusive idea that people wish to do him harm & that lately he has taken a strong dislike to his father, absolutely without cause. That for the last week he has refused to go out saying that people stare & laugh at him in the street.

Facts communicated by others, viz:-